"A flash of gold caught in my periphery as a beautiful human omega stepped into view. The scents of juniper, fir, and fresh rain hit me" thought by Jonathan

From the Twice Bitten Blurb: 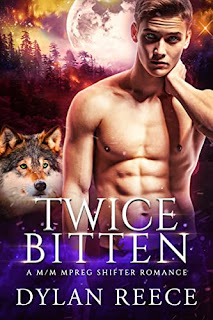 Sometimes even fate needs a second chance…
Was I too brave? Or just stupid? Tired, hungry, and poor, I challenged my pack leader and now I’m exiled from the city… and from my fated mate. Peter’s my dream omega—sweet, smart, and gorgeous—the type of man I’d want to have pups with. But he’s a human who doesn’t know the secret of wolf shifters... And he’ll never forgive me for standing him up.
Destiny leads me to discover a new home in the unusual town of Darlington where I join a pack of daring misfits and exiles who rally behind each other—the kind of pack I’d only ever imagined. But I can’t delve into a new life without my fated mate. My wolf and I will fight like hell to win Peter back, encourage him to take my claiming bite, and build a family together in Darlington… But only if he’ll give me a second chance.
Twice Bitten is the 40,000 word prequel to the Darlington Pack Series, featuring mpreg, steamy heat, a close-knit pack, and small town coziness. It’s got big bad alphas, a sassy best friend, and love conquering all. With a HEA, this second chance mm romance is a great way to dip your toe into Darlington. But be careful—you’ll never want to leave!

It was nice to discover a newish and new to me Shifter MM Mpreg author.

Twice Bitten the prequel to new The Darlington Pack series shifter series . This was a  medium to high heat second chance romance novella.  It is a great set up to create a new multi book series since a lot of characters are introduced as well as adversaries. I am looking forward to see where and how far and long the series will run.

In this book human Peter and wolf shifter Jonathan have a second chance romance and find their hfn/hea depending how the series develops further.

The first book in the series: Red Hot Fate is set to be released on January 27th, 2022 and I am looking forward to it.