"We are family, and we'll face these bastards together."

From the True Order Blurb: 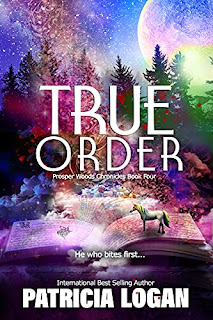 Bloodthirsty vamps. Dire Wolf royalty. The Prince of unicorns. What's next? All out war of course.
When I came to Prosper Woods, the last thing I expected was to be walking into a world of magic. Horror movies at the theater hadn’t prepared me for the realization that vampires, werewolves, witches, shifters, and ghosts were real. After six months, I’ve learned to live with it and I count many odd creatures as friends, not to mention my soulmate, a vampire who makes me tremble when he kisses me.
I’m hopelessly, helplessly in love.
When I came to Prosper Woods, my expectations were low. I brought Robert’s bones, numerous possessions, and regret for my role in my maker’s sheer bloodlust. I also brought Robert’s ancient tomes. When Sergio showed up demanding I give him the books, I banished him with the help of a spell and a friendly witch. I never expected those books to be the source of danger to my man and our life together.
I’m hopelessly, helplessly in love.
When the vampire came to town, I knew things were going to change. What I didn’t expect was to become alpha of my pack and fall in love with my best friend. Werewolf royalty moved into town, bad vampires were about to go to war with us, and the biggest surprise of all…the unicorns had a king of their own. I don’t know what’s about to happen, but I want to avoid war. With Sam by my side, I’m pretty sure I can face anything.
Because I’m hopelessly, helplessly in love.
Miki J's Review:

Wowsers.....what an ending!  You do need to read this series from the beginning - but the perfect time to do that is when the series is complete so you can binge the whole thing at once...

True Order kept me on the edge of my seat the whole way through.

There were new characters introduced - that carnival was hilarious !! - but still got to see the regular crew.

Loved that Greg & Sam had their own chapters/POV's - finally !!!

Romeo & Vincent just go from strength to strength and there were funny and loving and sexy and sappy moments with them.....but not after Vincent tried to do his own thing, knucklehead!

Overall, True Order is a great book and brilliant end to the series!