Just Watch Me by Lee Blair 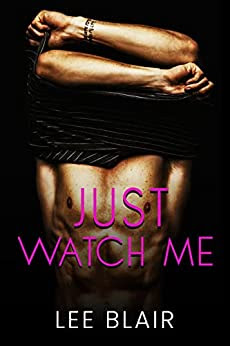 Jacquie says that Just Watch Me is surprisingly sweet. Don't judge it by the cover!

My idea of an adventure is logging into my favorite game and meeting up with my online friends from the safety of my couch. I’m happy in my boring and predictable life. I certainly don’t need a gorgeous man moving into my building to mix things up.

When my neighbor brings home a fresh hookup, I mean to close the blinds. I really do! It’s just that he has a tattoo and shows all that skin, and well, I’m ashamed to say I get busted. It’s not my fault he never closes his blinds and our studio apartments stare right into each other’s. I try to ignore my shame until, one day, my neighbor puts on a show, and like the magic of my favorite video games—I forget how to be boring.

Just Watch Me is a 38,000-word low-angst, sweet, and steamy gay romance about a tech geek who tumbles out of his comfort zone thanks to his gorgeous temporary neighbor. This book is for fans of ridiculous T-shirts, secret geeks, all the cheese, neighbors who become lovers, and a homebody falling for someone always on the move.

First of all - ignore the cover. You would assume by the image that you are getting something a little darker and angsty. You aren't. This is actually really cute once the neighbours meet. Perfectly matched personalities and a whole second-handlot of sweetness. It obviously starts with a voyeur/exhibitionist thing which was pretty hot and some second hand embarrassment but I loved every moment of this novella. The .5 off is because really I just wanted more. More steam on the page instead of being told. I wanted to spend that week with them together because I fell in love with Jesse and Skylar as a couple.

Told in single POV with a lovely HEA

4.5 Stars
Sarah's Review:
Just Watch Me was an adorable quick read that delivered on the premise and then a bit more. Reading through the blurb, I was expecting some cute voyeuristic thing with maybe a little bit of interaction. Instead, I got an adorable loves tory between Jesse and Skylar, a story about two men finding a middle ground in their own lives and bringing out the best in one another.
And they did that. Skylar travelled a lot, but found a sense of belonging he often lacked his entire life with Jesse. Jessse was sheltered and risk averse but found safety to explore in Skylar. They had enough common interests to ground the friendship and make it make sense. I liked the way that Jesse's anxiety about so much just kind of radiated off of the page. It made his feelings feel very real.
While I enjoyed getting to know Skylar as Jesse did, I do wish that this had been a dual POV, because I would've loved to see Jesse through Skylar's eyes. I would've loved to see his point of view of some of their through the window interactions. I also think his perspective would've given us some insight into some of his flaws, because Jesse's narration made it seem like he didn't have any - which made it slightly harder to connect to the book and characters.
But all in all, Just Watch Me was an obscenely sweet book with the right amount of steam. There is little to no angst between the MCs with all conflict coming as personal conflict in Jesse's life as he navigates his parents and career. This book was so much cuter than I anticipated and I would highly recommend to anyone who just wants something short and sweet.
Rating: 4 Stars
Heather's Review:
It's not often that you call a book built on voyeurism sweet and romantic, but Lee Blair has found the right characters to bring just those adjectives to the table.
Jesse, the shy, nervous and sheltered programmer sees Skylar, the adventurous, nomadic and sex positive neighbour through his window... and watches, not knowing that they'll soon meet up in real life... it's got a sweetness that you just don't expect from looking at the cover...
The pacing, the character growth and the plot were all on point and I really enjoyed Just Watch Me.
Rating: 4 Stars
Reds Book Reads Review:
Jesse is a shy computer programmer who spends most of his time either at work or at home and the majority of his friends are virtual ones. When a hot new guy moves in to the apartment opposite, Jesse has a front row seat to what goes on inside.
I loved the concept of this one but when I started reading I did have a few concerns over where this was going to go but I soon realised I had nothing to worry about. I loved how Skylar really helped Jesse develop and come out of his shell without being overbearing or demanding. The two were so different but these differences were approached really tastefully and respectfully. I also loved that even though this was a fairly short story, you got a real feel for Jesse's background and why he is the way he is. I really enjoyed Just Watch Me.
Rating: 4 Stars
4 Stars 4.5 stars ARC exhibitionist HEA Heather Jacquie Reds Book Reads Sarah C sweet voyeur