Ghost of Truth by Alice Winters

Any book that moves Jacquie to tears must be a good read...

From the Ghost of Truth blurb: 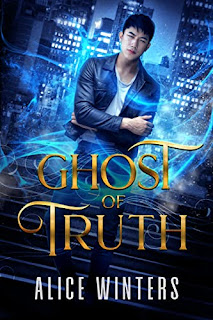 Hiro
When I first realized that I could see the dead, I never imagined that it would allow me to help save the lives of others and pull me into Detective Maddox Booker’s path. Through my ability, ghosts have become some of my greatest friends and allies.
But now, someone’s dead and his ghost is gone. Ghosts have sought my help for my entire life, wanting to be heard, but something is keeping them quiet, almost hostile as our search for the ghost of the dead man leads us to a small village. Even though everything looks normal on the outside, I’m starting to wonder what’s happening on the inside.
Maddox
Life is better than it’s ever been. Hiro’s by my side and has brought my best friend Reggie back into my life—if we can consider Reggie’s harassment (even as a ghost) a positive. And even Hiro’s horde of ghosts won’t keep me from asking him to move in with me. The only issue is that work is never quiet, especially when Hiro is able to dive into a whole new side of a case by speaking to the victims of the dead.
But when someone takes Hiro from me in the middle of the night, I know that I will do absolutely anything to get him back, and I will make them pay for what they’ve done.
Ghost of Truth is full of action, mystery, humor, and romance. Though more is planned for this couple, the mystery is solved and there is a happy ending.

5 stars purely because I cried at the end.

Seriously, it isn't often that I become so emotionally invested in characters that they make me cry.

This one is a little more convoluted than the first book and less silly too, though I love the writers humor and did have a few giggles. I would say there's better balance between the humor and plot than book 1, and I really enjoyed book 1. I just loved this more, perhaps because everything was familiar.

It really made me think about a few things at the end, which is all I can say without spoilers.

Hiro and Maddox have settled into their relationship so there's less drama there but I love them together. I really like books with established relationships and want to see more of them.

There's some steam in Ghost of Truth but not a lot which makes sense, they do a lot of hunting for ghosts.

Ghost companions, Natalie and Reggie, are still about and being more useful than before. There's still humor there but there's true friendship too. Reggie has really grown on me.

The way Hiro's ability seems to be growing is really interesting. I can't wait to see where this goes.

Ghost of Truth should be read as part of the Medium Trouble Series after Ghost of Lies for maximum enjoyment.