Three of our reviewers took on a new book, Daffodils, from a new to them author featuring the Flower Shop Detective Agency (if you want to learn more about AJ Clarke, check out her Author Interview) - how many of them plan to continue reading the series?  Let's find out: 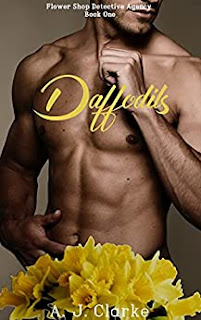 Sam
Sam has lived a comfortable life for the last two years. He has a roof over his head, a steady job, and a reliable source of physical release. In a world that would consider his Talent particularly dangerous, he couldn't ask for anything more.
Until he meets Eli - a young man who infatuates him instantly and threatens to turn his entire, comfortable world on its head.
Eli
At twenty-one, Eli should be partying, not sitting in a police station. He has spent the majority of his life pretending he has no Talent out of fear of something like this. Or worse.
When two strangers offer him a new life in a home surrounded by quirky people with Talents, however, it appears his luck has finally changed for the better. It doesn't hurt that he can't seem to keep his eyes off of Sam - the very definition of tall, dark, and handsome - either.
Daffodils is the first book in the Flower Shop Detective Agency series. Enter a world where a few, select people have powers - known as Talents - that can be used for good just as much as for evil.
This book contains graphic depictions of male-on-male sex and kink/fetish content.
Kinks/Fetishes include: boss/employee, age gap, and straight-to-gay first-time sex.
Tatted_book_freak's Review:
A new author for me yet again and a character-driven story to begin a newfound relationship. Every character was well-developed, with an in-depth assessment of each one.  An enjoyable introduction into a whole new world of “talents”, with realistic and natural progressions throughout.
"ℙ𝕖𝕣𝕙𝕒𝕡𝕤 𝕨𝕖 𝕤𝕙𝕠𝕦𝕝𝕕 𝕝𝕠𝕠𝕜 𝕚𝕟𝕥𝕠 𝕚𝕟𝕧𝕖𝕤𝕥𝕚𝕘𝕒𝕥𝕚𝕟𝕘 𝕟𝕖𝕨 𝕣𝕖𝕔𝕣𝕦𝕚𝕥𝕤 𝕞𝕠𝕣𝕖 𝕠𝕗𝕥𝕖𝕟,"
Eli was so soft spoken and frightened, shying away from authority figures. He’s hesitant about his new “family” unsure of whether to truly believe their intentions.  He’s truly innocent and his naïveté is charming.
"𝕎𝕙𝕪 𝕨𝕠𝕦𝕝𝕕 𝕪𝕠𝕦 𝕙𝕦𝕣𝕥 𝕪𝕠𝕦𝕣𝕤𝕖𝕝𝕗 𝕥𝕠 𝕙𝕚𝕕𝕖 𝕤𝕠𝕞𝕖𝕥𝕙𝕚𝕟𝕘 𝕗𝕣𝕠𝕞 𝕞𝕖 𝕝𝕚𝕜𝕖 𝕥𝕙𝕒𝕥?“
Sam’s apathetic character was oddly the most reassuring person. “He was stoic without being cold and appeared self-isolated without being untouchable.”  And, his need to protect Eli was overwhelmingly addictive.
"𝕀'𝕧𝕖 . . . 𝕀 𝕞𝕖𝕒𝕟 𝕟𝕠𝕓𝕠𝕕𝕪 𝕙𝕒𝕤 𝕖𝕧𝕖𝕣 . . . 𝕥𝕙𝕒𝕥 𝕨𝕒𝕤 𝕞𝕪 𝕗𝕚𝕣𝕤𝕥 𝕜𝕚𝕤𝕤."
An undeniable connection between these two, like a magnetic field pulling them together. A chemistry filled with sparks of electricity and chills throughout their touches.  And, the heat within these pages was filled with so much spice!! Excited to see where their relationship goes and the adventures they entail.
Rating: 5 Stars
KJNRose's Review:
Wonderful Characters and a gripping storyline.
This was a new to me author and I'm excited I had the chance to read Daffodils.  This book has wonderful characters who each have such great personalities that it makes you keep wanting to read.  Everyone shines through the story as their own identities making this seem more realistic instead of sounding forced.  There is so much chemistry between the MC's that you just cheer them on through the whole book.  Can't wait to read the rest of the series.
Rating: 5 Stars
Karla's Review:
The mystery behind the Daffodils,  Flower Shop Detective Agency in one worth solving. A new beginning for Eli and a chance for a real connection for Sam. The Daffodils Detective Agency is full of talent.
But not talent like one would immediately think. Sam has been partnered up with the new t talent, Eli. Eli is excited to see how far he can take his talent. It was a great beginning and left the reader wanting more!
Rating: 4 Stars
4 Stars 5 Stars Age Gap Boss Gay Awakening Karla KjnRose mystery Series tatted_book_freak