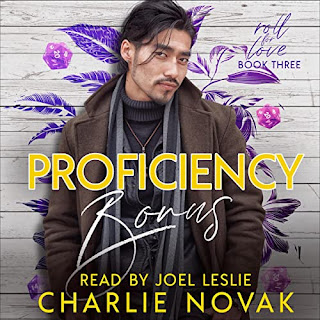 Proficiency Bonus is the third book in the Roll for Love series.

It's Lewis and Jason's story and features a disorganized PA, a jaded actor on the verge of a breakdown,  plushies, Pokémon, and pink-haired aesthetics.

Organising yourself is harder than it looks—Lewis may be a highly proficient PA for two very successful cosplayers, but that means nothing when you’re living at your parent’s house after yet another failed relationship and trying to find some stable ground.
Jason Lu, star of Celestials, is stuck between a rock and a hard place. When the show is cancelled and his character pigeonholed into a homophobic ending, Jason must choose whether to fall in line or break ranks. But one misstep will mean bumping heads with some powerful people.
Teaming up with the very cute guy he met at Comic Con seems like a natural first step and now Lewis and Jason must choose between heartbreak and justice. As they forge ahead, they realise there are no bonuses for navigating life’s challenges, instead they’ll just have to fight for what they believe in.
But sometimes overcoming the biggest hurdles yields the best results.

I thought Jay was my favourite, then Edward, but it's totally Lewis. I just loved everything about him, from his tangents to his crazy family.

Jason and Lewis' meet cute was adorable and I loved how naturally things evolved from being friends to being more.

The steamy parts worked really well in the narration.

Joel Leslie is a talented narrator, his voices are distinctive and it was easy to discern who was talking making it easy to follow along and sink into Proficiency Bonus.