A Magical Arrangement by Toby Wise 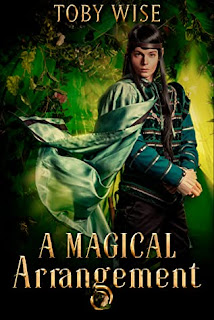 What do Red's Book Reads and Jacquie think of A Magical Arrangement, a standalone fae mpreg romance from Toby Wise

Could an arranged marriage lead to two people saving the world?

Caspian is on a mission; go to the human realm, form an alliance, and stop the rifts popping up in the fae and human realm. The only problem? Caspian has to play by human customs which involves an alliance through marriage, and to make matters worse, he and his husband-to-be haven’t started off on the right foot.
Ash was raised a prince but his heart always longed to be adventuring. With rifts opening in his realm, and his new fae husband by his side, Ash will finally get to live that dream. But will magic, evil creatures, spreading darkness, and budding feelings be too big of a distraction for Ash to handle?

A Magical Arrangement is a 34k word arranged marriage story between a fae and a human. Inside you’ll find magic, adventure, mpreg, and of course, a happily ever after.

This was a fairly short fast-paced story but I enjoyed it. I would say it was fairly low angst and I liked that it was a stand-alone story. Due to its length, there wasn’t the most detailed world-building but there was enough that you got a feel for the two different realms and could understand their similarities and differences.
I loved how the two princes grew in their emotions towards each other and how you got to learn more about the side characters too. I would say this is fairly low steam as well but this fits in well with the rest of the story and I think anything more would have felt out of place. I would say A Magical Arrangement is a great book for anyone looking for a sweet Fae romance.

A really enjoyable, though shorter, read. Low angst, lower steam, and told in dual POV.
Caspian is sent to the human realm to close rifts that are threatening both worlds. There he is married to Ash to bring the two peoples together, though, after their first meeting, neither is particularly keen on the union.
The way their feelings grew worked for me and ended up being very sweet.
Although A Magical Arrangement is mpreg, the whole pregnancy and birth are skipped over so it's more mpreg lite which may make it more appealing for a broader range of readers.
I'd have loved a little more background on the rift and enemy there, but I loved the little hints of the fae realm with their wedding traditions.