H.M. Wolfe's Blessings and Miracles studies the magic of love in all its forms - especially around the holidays. Catch an exclusive sneak peak before the December 9 release date! 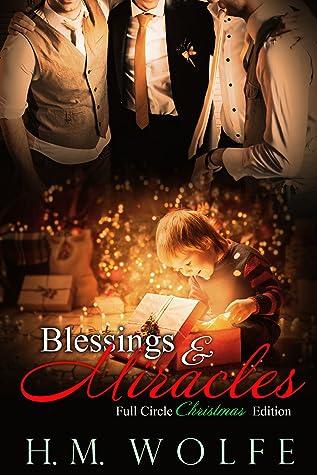 It is that time of the year again...

With her niece Willa and her nephews' Sebastian and Fabian's life partner Vincent and husband Lance as trusted kitchen helpers, Zoe Stark throws another epic Christmas party at the family mansion near Hartford, Connecticut. All the members of the Stark and Bloom clans are going to be present, and there are a lot of achievements and happy events to celebrate.

Zane Parsons, a young widower, drives all the way to Ordando, Florida, to Connecticut, to honor the promise he made his grandmother on her deathbed. He is torn between hoping for a new life for him and his only child and the fear of being rejected. Zane strongly believes in Christmas miracles, but will he experience one, too?

After being separated from the only man he ever loved for more than thirty years, Rhett Randall gathers his courage and drives to his ex-husband family's mansion to talk to him for what could be the last time. It could be a total disaster, but it could also be one of those magic moments associated with Christmas.

The Christmas carols mix with the pitty-pat sound of little children's feet and their happy giggles in this gay romance novel about blessings, miracles and the power of love in its many forms

Rowena. So, this was her older brother Willard who loved her and her twin sister very much but couldn't see them as often as he wanted. Kane mentally facepalmed himself for not figuring things out earlier. The poor redhead must have been involved with some asshole who controlled his life and, most likely, abused him in the worst of ways.

“Well, most likely Uncle Alastair gave them a map with the best hiding places,” Sebastian tried a joke in an attempt to make the atmosphere less tense.

“It's a possibility I never considered,” Willard replied, his voice a bit livelier than earlier. “I have nothing against the girls playing all day long, but, when great-uncle Alastair and Mallory are away, Morwena and Rowena are my responsibility, and I wouldn't want to lose their trust.”

“Older brother, you couldn't find me! I won again!” Rowena hugged Willard, looking up at him and giggling happily. “I'm the champion, yay!” She did a little victory dance.

“Yes you are, indeed. But don't forget about your good manners,” Willard said in a soft voice. “We have guests.” He discreetly gestured to Ian, Warrick, and Kane who were about to climb the stairs to the main entrance with Sebastian and Vincent as guides.

“Hi, Ian, I'm so happy Warrick brought you with him. The girls' team needs a big, strong man like you to help us build a taller snowman.” Rowena cutely grinned. “Your friend Kane is a gentleman. He let me hide in your car and didn't rat me out to brother Willard.”

“And voilá!” Ian exclaimed, making great efforts not to burst into a wild fit of laughter. “The explanation of your mysterious absence from earlier. A couple more clever maneuvers like this one, and you'll be in the top position for the kiddies' preferences.”

“My older brother Fabian won't be happy about it, and neither will Ardan.” Sebastian grinned. “Trust me, kid, if you managed to be in Princess Rowena's good graces in such a short time, all the others will be at your feet in no time.”

“Run, it's a trap.” Willard feigned panic. “The shorties will pretend to worship you, but before you know it, they'll turn you into their slave. Trust me, I know what I'm talking about, been there, done that.” Adoration, affection, and warmth mixing in his emerald-green eyes, Willard picked Rowena up and kissed her on both cheeks. “But you can't stop loving them.”

“Let's get inside. You young folks are not affected by this bitter cold, I see, but my old bones are freezing.” Vincent shivered dramatically, making Warrick, Ian, and even Sebastian smirk.

“Go ahead. I think I'll stay for a while longer,” Kane said, looking at Willard from the corner of his eye. “I want to get to know the rest of the...um...shorties,” he continued, blushing a light shade of pink.

“As you wish, but I wouldn't advise you to go there unprepared. Listen to Willard; he's an invaluable source of advice on how to avoid the kiddies' traps.” Ian benevolently smiled, disappearing into the mansion.

“I'm sure I have a lot to learn from him”—Kane offered the redhead a shy smile—“if he wants to share, that is. I don't want to become an inconvenience,” he added in a hesitant voice.

“Brother Willard is alone and sad,” Rowena suddenly spoke in a small voice. “Don't you want to be his boyfriend? He’s always good, but Santa never has any presents for him.” She wrapped her arms around the redhead's neck.

“Rowena Stark, that was...this is not how things go.” Willard hugged the little girl, then put her down. ”It's...it takes time and...relationships are complicated. You'll understand this when you grow up.”

“I just remembered I have important things to do.” Rowena ignored the redhead, grinning cutely. “I’ll leave the two of you to talk.”

“I apologize for my little sister's behavior. This is not her usual self, she's...I guess it's my fault.” Willard lowered his head.

“I love children very much,” Kane gently spoke, “and I saw you do, too. I'm sure we have other things in common, as well, and I'm looking forward to discovering them.”

There must have been something in the air that morning that affected people, making them act differently than usual. From an impulse he couldn't explain, Kane touched Willard's hand with the tips of his fingers, then took it in his. The redhead stared down but didn't shy away from the touch, the deep intimacy of the skin-on-skin contact making his heart beat a little faster.

Kane could sense that Willard Stark had a lot of wounds that went deep down into his soul, and he kept many painful secrets to himself. However, the redhead was a special man, and Kane was willing to wait for as long as it would take for Willard to open up to him. Maybe the two of them were brought together for a reason. Maybe the Christmas magic really existed. Kane smiled at the thought.