"Even so, he didn’t stop playing.

And Saman couldn’t turn away.

Why was this man there on this particular platform, and where had he learnt glorious music like that? Saman’s curiosity about the musician was, in itself, strange. He had to acknowledge he was inexplicably drawn toward the fascinating man.' - Samas"

From the Sparkling Prophecy Blurb: 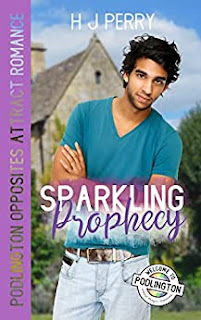 We’re worlds apart. Is there anything binding us together beyond pure lust?
Bo Ayers is Romani through and through. Travelling is in his blood, and his job requires time away from home, but he misses his family and friends in Podlington when he’s on the road.
Big-city businessman, Saman Shah isn’t sure how he ended up in the quaint Somerset village, but he is happy to hang around for a day or two. Unexpectedly, opportunity knocks, and it’s not just about investments and profits.
As Sam gets to know Bo and his family and friends, all his prejudices are challenged, and it isn’t long before both men are offered opportunities to change their lives...together. The only question is, will they take it?
This LGBTQ+ Opposites Attract novella can be read as a standalone or as part of the Podlington series.
Sparkling Prophecy is a low-angst, feel-good story features real Romani caravans, lucky heather, and more tins of plum tomatoes than you can fit in your kitchen, plus, of course, a happy ending.

Saman's day is not going as planned. After a chance meeting with an old lady, it still does not go well, but his misfortune seems to become one chance after another. One of those chances is hearing play Timbo/ Bo at the local station's piano. They have a click as friends and soon find they are attracted to each other.  Although the attraction develops quickly it is written in a way that you 'see' it all happen and believe it.

I like that the author choose to base Bo in a positive Romani family the same as Sam is based  in a large positive Hindu/ Indian family. The author mentions the prejudice that exists in  both communities but does not make it an issuers, which I appreciate  I overall found this is  light fun read in which it is always good to see recurring characters.

Sparkling Prophecy is based in the Poddlington Village Romance series in  Opposites Attract subseries. It is a multi author series.  I recommend this book if you like to read it as a stand alone or as part of a larger series by multiple authors based in Poddlington