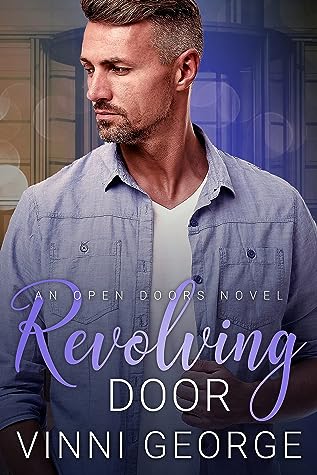 There are a few tropes that I absolutely adore, and enemies to lovers is one of them. Well done enemies to lovers, at least. And Vinni George hits quite a few of my marks with Revolving Door, giving a cute enemies to lovers with a fair bit of heat and side characters that hurt your face from how much you're smiling after reading them.

Fletcher Morgan doesn’t like a single thing about Archer Waverly—not his pretty face, his wicked wit, or his perfect body. He especially hates the way Archer flirts with anyone and everyone. Everything about Archer reminds Fletcher of someone from his past he would much rather forget.

Archer thought Fletcher could be the silver fox of his dreams…until Fletcher opened his mouth and told Archer exactly how he felt about him. Now Archer is more than happy to rile Fletcher up and accept the consequences. Sparks fly every time they see each other proving hate is as potent as lust and enemies with benefits just might be hotter than friends with benefits.

When an unfortunate incident involving Archer’s aging drag queen housemate brings Archer and Fletcher together, they realize there might be more to the other than meets the eye and maybe there really is a thin line between love and hate.

Revolving Door is the second full-length novel in the Open Doors series featuring a slightly surly silver fox surf shop owner who refuses to fall in love again, a (mostly) reformed flirt who has never been in love, and a fabulous aging drag queen who has a penchant for platforms.

Let's start with (to me) the most important part: the characters.

Fletcher is a silver fox surf store owner who was burned in the past. The burn has left a thick layer of emotional scar tissue around his heart, especially when it comes to anyone who reminds him of his ex-husband. And Archer, unfortunately, reminds him of his ex-husband. Archer is flamboyant and boisterous and extroverted and loud and flirtatious and seems like he is the life of the party and must be the center of attention. Needless to say, Fletcher hates him from the jump and Archer is immediately intrigued by him.

The first part of the book spans the course of several months, with each chapter showing an encounter between Archer and Fletcher. It sets a great ground work for the novel and really introduces us to the characters. It was a great way of getting to know Archer and Fletcher as individuals while still witnessing the dynamic between them. It gave a longer time of Fletcher disliking Archer and Archer being at first determined and perplexed and later starting to dislike him as well, because frankly Fletcher was a bit of a prick.

However, it also lends to them getting to know one another in these scenes and makes it seem more realistic when that starts to fade away. An underlying thread throughout the entire thing is the sexual chemistry between them. When it finally happens, its like a match set to gasoline.

Outside of our main characters, we had great side characters. I loved all the various guys who hung around the surf shop, Fletcher's friends. But the standout and scene stealer was the sixty-nine year old drag queen that Archer shared a house with. Every time he was on page, he stole the scene completely. I would read a full series of his antics, both growing up as a gay man in San Francisco and now as the aging drag queen, Summer Sausage.

Revolving Door was amusing and hot. The enemies to lovers really worked for me. None of the hurdles in the relationship felt contrived to deliver eleventh hour drama, which is always appreciated. It is a dual POV novel with relatively low angst and a grumpy/sunshine relationship that makes me grin.

Rating: 5 Stars
Heather's Review:
Revolving Door was a great book with characters who had depth and wove their pasts into their present and Vinni George was able to impart their individual gaze on the story in a way that felt both intuitive and natural.
I really liked how both characters grew during the story and how the side characters were woven into the thread of the story too...
While I can't class this a true enemies to lovers, the animosity that started this book certainly added to the heat of their initial encounters - I definitely consider this a slow burn to medium/high heat novel and I approve!
Rating: 5 Stars
5 Stars Age Gap Contemporary Enemies to Lovers Heather Sarah C Series Silver Fox