It's Complicated by Kindle Alexander

I had the best intentions to read Reservations, the first book in the Reservations series before I dove into It's Complicated, but life got in the way and so I dove into the book head first and hoped that I'd be able to pick up enough clues to figure out the story and I'm happy to say that I did! 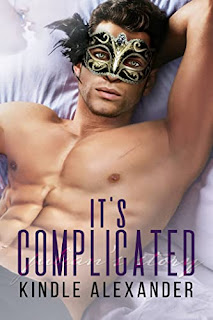 Nightclub manager Julian Cullen runs Reservations with impeccable precision and a deep sense of pride. But repressed memories from his abduction two years ago surface, leaving him struggling emotionally. Julian vows to reclaim his previous life but doesn’t factor in the biggest distraction of all: the handsome cowboy hanging around the club intent on gaining his attention.
Entrepreneur Beckett St. Clair built an industry-leading survivalist training company through hard work and dedication. The tough as nails outdoorsman can navigate any situation or so he thinks…When a chance encounter with a guarded night club manager leaves him tumbling head over heels into uncharted territory.
One man is lost to his past, the other dreams of a future.
Both men will soon find out love is never easy…it’s complicated.
Heather's Review:
Would reading Reservations first have enhanced my understanding of Julian's story? Most definitely, but even still, I felt like I was able to pick up It's Complicated and dive right into the meat of the story.  Kindle Alexander is able to weave the plot in a way that I both understood and loved Julian right from the start!  Introducing Beckett in a more mysterious way offset that instant connection I felt with Julian, although I quickly warmed up to Beck's perspective as well...
This tale quickly pulls the reader into both the slowly building relationship and the intrigue surrounding Julian's past... I couldn't put it down once I started... I had to know if Julian would ever have a breakthrough and if they could have their HEA... and I'll leave it as there is another book coming that continues the story, including the main characters from It's Complicated.
Rating: 5 Stars
5 Stars Contemporary Heather Hurt/Comfort Series slow burn steamy