It’s a fight to keep his mate safe from a vampire gone rogue. But has the vampire actually gone rogue or is it a plot from within?

From the Freezing Aversion Blurb: 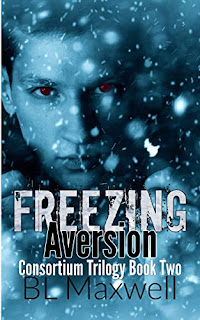 The cold isn’t the only killer in the wilderness.
Benjamin Coulton is a tracker employed by the Consortium, the ruling counsel of vampires. When he’s sent to investigate a rogue vampire killing indiscriminately in a remote region of Alaska. Bad weather hampers his effort and he loses the vampire he’s been tasked to find.
Leon Davis and his friend Trevor agreed to be winter caretakers for several cabins and a fishing lodge, thinking it would be easy money. They settle into their daily routine of checking the cabins for animal break-ins, or broken water pipes, and prepare for a long winter.
Until a run in with a vampire changes everything.
Ben finds a newly turned vampire left for dead by the rogue vampire, and suddenly Ben's mission changes course. In the freezing wilderness of Alaska, he uncovers more truths and the mate he'd always longed for... and now the vampire he was tasked to find is hunting them.
#MMParanormalRomance #vampire #fatedmate #thriller
Karla's Review:
Freezing Aversion is a nail-biting, edge of your seat drama to keep his mate safe and solve the mystery of why his tracking abilities are hindered in this action-packed romance. Benjamin gets the shock of his life when he discovers the newborn vamp he was sent to kill is his mate and the vamp that turned him is crazed with bloodlust. Plot twists and sweet romance fill the pages of Maxwell’s second installment of the Consortium Trilogy.
Rating: 4.5 Stars
Heather's Review:
Vampires are not typically my jam... but after reading Kate Hawthorne & EM Denning's Blood in the Water I have been trying to push the envelope of what I read... and Freezing Aversion was my next pick.. I haven't read the first book in the trilogy yet, but I found that even as a standalone, Freezing Aversion was a nail-biting read.
I love that the intrigue goes beyond the surface and it kind of reminds me of a Star Wars type trope - where the poison isn't coming strictly from the individual players.  I am putting Burning Addiction, The Consortium book 1 on my TBR to catch up on where things are and then waiting with bated breath for book three - which I sincerely hope is Joel's story.
Rating: 4.5 Stars
4.5 stars Fated Mates Heather Karla PNR thriller vampire