The need I had for him, something that had started sexual and was turning into so much more, increased the longer I touched him. I shifted until I was leaning against the desk and spread my legs to make space for him, and he slotted himself in place. - Marcus 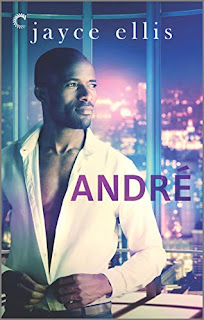 After a week filled with nonstop work, André Ellison heads to the club to blow off some steam. One night off is the perfect distraction from the project that’s about to make his career—or tank it completely. A few drinks in and he leaves with a smoking-hot stranger for some scorching, burn-the-sheets-up sex.
Marcus Thompson is going places, so he can’t think of a bigger waste of time than being put on loan to a two-bit firm to prepare some small-time report. The last thing he wants—or needs—is his impeccably dressed, hot-as-hell one-night stand as his boss.
As they work side by side, their attraction grows to a fever pitch, but there will be no kissing, no touching and absolutely no sex until the project is over—if they can wait that long.
Laora's Review:
I appreciate that Jayce Ellis, as a woman of colour, brings more diversity to the mm book scene, both as writer and the characters she creates.
This is the second book in the series  In my opinion it is really well written. I have read the first book in the series, but I would be able to follow this book without reading the first one.
The main characters André and Marcus have an amazing one night stand. Against all odds they meet again as boss and intern in the financial world. They have to find a way to keep a good working relationship. They also need to face their own insecurities and fears; in relation to their family and the dynamics with them.
Also they each have to come to terms with being out and being in an eventual relationship.
The characters are well rounded, we get plenty of background information about both, more so about André.
Jayce Ellis is fast becoming one of my new go to authors. I am looking forward to more of her books.
If you like a great mm romance with a HEA this is your book.
Rating: 5 Stars
Heather's Review:
I honestly considered DNFing this book a few times because it felt like it was getting bogged down in the work story rather than the relationship - it focused so much on them hiding their feelings that it felt repetitive. It was mostly worth finishing - the ending was good and solid. I did really like the characters and several of the side characters including Fiona, but I would have loved to have had the story move faster.
Rating: 3.5 Stars
3.5 stars 5 Stars Boss Heather InstaLove Laora One Night Stand Series