A Spoonful of Sugar by AE Lister

If you haven't taken my advice to pick up AE Lister's Skeletal Equations, then you haven't meet Scott, Jericho and Pascal yet and you're probably not ready to take on A Spoonful of Sugar... 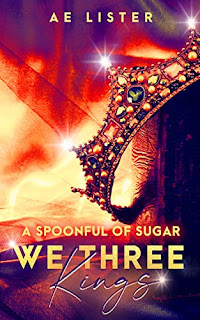 A We Three Kings story
A kinky interlude over the holidays brings three men closer as their unconventional relationship evolves from casual to serious.
Scott Vernier met Jericho Griffin and Pascal Olejatz at a Halloween party in October and soon became casually involved with the kinky, committed pair.
Over the course of the holidays, the men struggle to find time together outside their busy schedules and finally make space for each other over Christmas week. Scott finds himself craving more of a committed relationship with these wonderful men and tiptoes around the issue to find out if Jericho and Pascal feel the same.
Scott’s dreams of expertly delivered medical play already a vivid reality, the men introduce him to more deliciously subversive scenes including teacher-student role play and invite him to dabble with imaginary non-consent.
Heather's Review:
I'm not saying that A Spoonful of Sugar can't stand on it's own, but honestly it's written as a progression and the characters in A Spoonful of Sugar are refined and nuanced beyond their initial meeting in Skeletal Equation and since I'm biased about how amazing Skeletal Equation is, let's just say this is not a standalone...
That being said, it's AMAZING!  So hot, kinky and still sweet... there is a focus on romance, defining the relationship beyond kink and scenes, there is an integration of real life that you don't see discussed in the first book.  That being said, the kink scenes are still scorching hot and deeply satisfying.  The story goes beyond medical and puppy play to include other roleplay scenarios and also introduces consensual non-consent or dub con.
I truly hope that A Spoonful of Sugar is not the end of exploration for Scott, Jericho and Pascal - as satisfied as I was with this installment, I'm not nearly done with the trio!
Rating: 5 Stars
5 Stars BDSM Christmas Contemporary Erotic Romance holiday novella