What do you get when you combine two high school football (soccer, this is in England) captains with a grudge the size of Alaska? You get Becca Steele's Savage Rivals. 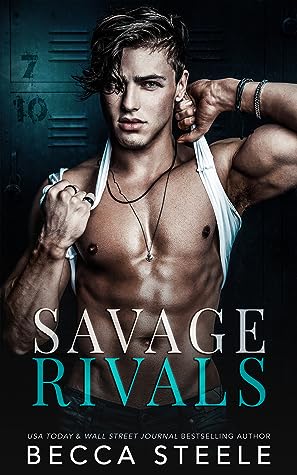 Asher Henderson.
Captain of the Highnam Academy football team, and the bane of my existence.
As Alstone High’s team captain, I’ve been pitted against him from the beginning, but our conflict isn’t only reserved for the pitch.
Everyone knows we’re enemies. From our first encounter, our rivalry has been escalating, spiralling out of control.

Until one night when everything between us changed.
He pushed me too far, and we crossed a line that should never have been crossed.
Now, I can’t get him out of my head.
Can we ever be more than rivals, or are there too many obstacles in our way?

One thing I know for sure.
Things between us will never be the same again.

*Part of Savage Rivals was originally included in the Brutal Boys on Devils Night collection. This edition has been expanded with additional content and HEA.

Savage Rivals follows Levi and Asher as they move from enemies to lovers in a fun and interesting story. Levi is the captain of his private school's football team, a rich kid at a private school with a massive ego. Asher is the captain of the public school's football team, the next town over. He lives with a single mom, works at the neighborhood grocery, and is used to rougher living. The two schools are rivals, but no one on the team has the kind of rivalry that Asher and Levi do, a rivalry that is called out by both of their best friends as an obsession.

The book starts with Asher declaring that he is going to fight Levi in public, something that is apparently very common for these two schools. There is a skatepark where fights are held and spectated, challenges thrown down and settled in the concrete of the bowl. Asher feels this is necessary as retribution for Levi's team trashing their school's locker rooms. But that's not the only retribution they have planned, because that would be too easy.

The rivalry between Levi and Asher takes over the first quarter of the book, at least. Watching the rivalry is amusing, because of the way they describe one another and the acerbic verbal bars they are constantly throwing. I also really like that they come to blows a few times, because it feels realistic. They aren't just throwing words at one another with nothing to back the vitriol. In fact, their hatred for one another feels incredibly real.

And it doesn't fade away in an instant. Instead, it slowly transitions as they recognize it for sexual tension and begin to give in, as they begin texting one another and getting to know one another. This book is not an instant love story. It takes place over the course of a school year - primarily in football season - and you get to see a lot of the ups and downs of the main relationship.

Aside from the two main characters, there are some great side characters that really flesh out the story. Levi's best friend, Milo, is the kind of best friend people should aspire to be. Asher's best friends, Danny and Talia, are amazing and supportive and always have his back. Its even better because Talia is Asher's ex and the current object of Danny's affection, and we don't get a bunch of jealous posturing. Instead, Asher is happy for his friends potentially finding happiness with one another. The few glimpses we get of other members of the football team or other characters are good and they're pretty fleshed out, serving a purpose in Asher and Levi's lives. Not one character feels extraneous. Each of them serve their purpose for the story or for development of the main characters and each of them feel real.

I absolutely loved Savage Rivals. It was my first Becca Steele but I already know it will not be my last.