Scotland is proudly represented in this hot and sweet holiday romance...

From the Salvaging Christmas Blurb: 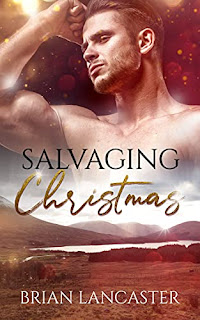 For years they have kept the Yuletide Gay Club going with like minded friends until this year grim providence decides to stick in his ugly snout. But just as everything starts to fall apart, the son of the owner turns up and the real fun begins.
Tired with awkward family Christmases, Trevor McTavish and his best friend have planned a getaway each year for twelve close gay friends to enjoy the festive season together in remote country locations around Britain. Far from the maddening crowds. Beautiful Stratham Lodge in Scotland, hugging the shores of Loch Arkaig, is set to be this year’s rental destination.
Except grim providence has stepped in and, one by one, friends have dropped out. Against their better judgment, they decide to bite the bullet and forge ahead with a much reduced, and somewhat contentious party, which includes Trevor’s formerly gay ex-husband and his new girlfriend.
On the second day, Trevor realises this year’s break is going to be a disaster. But then the son of the lodge owner, Rudy Mortimer, appears and the fun really begins.
Sheena's Review:
I'm always very, very nervous about novels set in Scotland and writers attempting to write people with Scottish accents. I'm Scottish myself and on more than one occasion I've found the attempts cringeworthy. Not here though, and I am so glad I took a chance on this. I liked the author's previous work, Any Day so I kind of knew what to expect.
There are two protagonists - the main one is Trevor and his interest Rudy (which is also my nephew's name and not a common one so that took a bit of getting used to!). But I'd argue the star of the book is the setting in the scottish highlands. Either the author has done a lot of research or has actually visited or stayed there because I loved it. The whole festive season was so lovely, right up to and including Hogmanay (thank you for calling it that, it's not New Year's Eve up here). It was those little details that really made the setting for me.
Adding to that I really liked Trevor, although I didn't like he appeared to be such a doormat to the odious Karl who appeared to have zero redeeming features at the start along with the overbearing Mary. They turned a corner though and I didn't hate them in the end, they were well enough written that I had sympathy for them in the end and glad they got their happy ending too.
I loved Rudy and Trevor though, it was such a sweet and yes, hot, short romance but somehow didn't feel rushed at all. Insta-love is one of my pet hates but the author avoided that too and while it was short, it was so sweet and felt right.
Salvaging Christmas is a lovely Christmas story which I'll probably revisit in years to come too.
Rating: 4 Stars
Miki J's Review:
Salvaging Christmas is absolutely adorable. Told from 1 POV (Trevor), tells of a group of friends who are actually more like a made family, that gather for each Christmas. However, this Christmas, not all of them are there which changes the dynamics of the group, along with the new group of people & changes in relationships. This story is the epitome of the Christmas spirit - forgiveness, acceptance, a baby and love....... lots & lots of love !!! There is a bit of drama as well.....Overall, I was totally absorbed into this world, so much so that I wish I was part of this made family as well..... And I loved how each chapter is titled from a Christmas song.
Rating: 5 Stars
4 Stars 5 Stars Contemporary holiday Miki J novella Sheena