New Year Not You by Edie Montreux

Can Brady forgive the guy that nearly ruined his life? Can Tate convince Brady to give him a second chance after he got it so wrong?

From the New Year Not You Blurb: 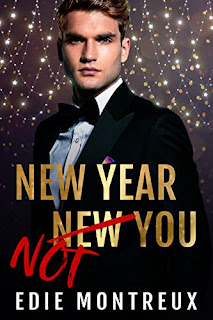 Last year, law student Brady Madison's binge drinking left him naked, unconscious, and in trouble with the law. Now 350 days sober and with only two weeks to serve the last twelve hours of community service, Brady's faced with another difficult choice: take an offer from the jerk who took the incriminating pics or spend the remaining hours in jail.
Tate Quinn's snap judgment in Brady's hotel room on New Year's Eve ruined any chance he had of hooking up with Brady. Worse, his parents refuse to pay for another semester of grad school until he makes his mom's New Year's charity event a success.
Tate needs a volunteer to help him herd the cats, er, kids, at the New Year's Eve afternoon party, and Brady has always been good with kids. Can they put aside their past anger and shame for six hours, or will these potential lovers turned enemies resolve to remain enemies in the new year?
New Year Not You is a 63k-word enemies to lovers M/M romance between a recovering alcoholic and a recovering man-child. This novel has an AA sponsor moonlighting as a DJ, a cold war between two moms, and two dudes who are not looking for true love (but find it anyway).

After I got over the rocky start of not liking Tate at all, I enjoyed this story of redemption and forgiveness.

Tate manoeuvres Brady into finishing his community service hours at his family's children's charity event. It means the pair have to work together and there's a chance that they can clear the air and maybe try again.

They were cute together and Brady in particular was mature enough to communicate when things got difficult.

There's a lot of issues on both sides but they end a lovely happy ending.

Slow burn and told in dual pov, New Year Not You is worth adding to your tbr.