Sometimes life just is not fair, how hard you may try. CF White explores this in Misdemeanor, the first book in her Responsible Adult trilogy. Find out why Laora rates it so highly. 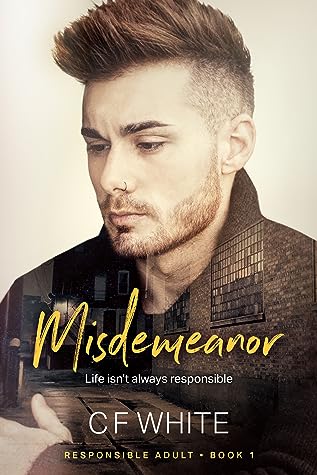 After his mother tragically dies and his deadbeat father goes off the rails, nineteen-year-old Micky is left to care for his disabled little brother. Juggling college, a dead-end job and Flynn’s special needs means Micky has to put his bad-boy past behind him and be the responsible adult to keep his brother out of care. He doesn't have time for anything else in his life.

Still scarred from a past relationship that went bad, Dan’s not looking to complicate his life. Everything tells him he should stay away from Micky but he’s powerless in the face of his overwhelming attraction to his newest staff member. Especially when he begins to peel off Micky's layers to reveal the true man beneath the façade.

As their attraction builds, revealing more of themselves to one another, each is faced with a stark question: Can Micky allow himself to follow his heart, and can Dan risk falling in love with someone so tempestuous?

Misdemeanor is the first book in the Responsible Adult trilogy and is a re-release of the previously published version by Pride. It has been edited with new content added.

Author note: Potential triggers include references to suicide, physical assault on a minor, criminal behaviour and bullying of a disabled child.

I liked reading and listening to this author and her books. This series is set in the UK; gritty and not always easy to read or listen to, but they always draw me back in for more.

The main characters are Dan, 22, gay, a supermarket section manager with a degree in English and Micky, 19, bi, who has to take care/ raise Flynn, his 8 year old brother who has Williams syndrome, go to college and work.
After his mom commited suicide and his useless dad became even more of a pest Mikey is taking care of his brother as best as he can.

I found myself wishing Micky and Flynn where dealt a better hand. Micky made a few poor choices in his younger years, he is still young, and trying hard to leave his criminal past behind. I felt his frustration in dealing whith services related to the care of his brother, which is so relatable for anyone whos has dealt with servuces like those. Also I was wishing Dan to get his but in gear, which he does near the end of the book.

This book ends on a cliffhanger and I can't wait to start listening to and/or reading the next to two books in this series.

Note from the author: Misdemeanor is the first book in the Responsible Adult trilogy and is a re-release of the previously published version by Pride. It has been edited with new content added.