on November 12, 2021
I didn't realize when I got Foul Ball from Booksprout that it was part of a series, but I feel that as my introduction to Haven Hadley's work, it can easily be read standalone (but you'll probably want to add the first four books to your TBR like I have....)
From the Blurb: 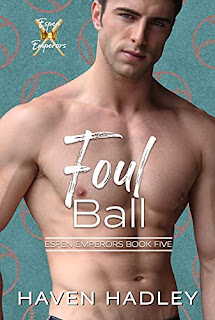 Declan Armitage. The right fielder Espen got in a trade.
A powerful hitter, a hard throw, and an unmatched stolen base percentage. Not expecting to be traded, he was happy to learn where he was headed. If only he didn’t need to find a new place to live. One phone call from his brother and the plan was put into motion.
Brock Richmond was loyal to a fault. When his best friend called and asked if his brother could stay with him, Brock didn’t hesitate. Declan didn’t have a home in Espen and Brock had a spare room.
Brock retired from professional football at the end of last season. All he wanted was peace and quiet, a chance to relax. He pushed his body far enough. A break was needed. And he wanted someone to spend his time with.
He also had to get up the courage to tell everyone the one secret he kept his entire football career—Brock was gay.
Declan had wanted Brock since he was a teenager. Not that it was a possibility with a straight man. Except, Brock wasn’t so straight after all.
Being true to yourself was a tough road. The fear of rejection was very real. The chance that not everyone would accept the decisions you made.
The ball was high in the sky. The line of in or out wasn’t far. Declan had to decide to let it fall foul or make a dive for it.
Heather's Review:
As a new to me author, I approached the book with a bit of trepidation, but I was immediately and thoroughly sucked into Declan's world and then of course, Brock's.  The sports team part of the book is well done and there's just enough baseball talk to make sure you know where the book is set.
This book has a lot of mixed signals and crossed wires in the beginning.   Especially since Brock has kept his secret from all but two people all his life... and his new roommate is not one of them.   This book has a slow burn beginning, explodes in the middle and simmers until the end...
If you like friends to lovers, brother's best friend and sports romances you'll love Foul Ball by Haven Hadley.
5 Stars ARC Baseball Contemporary Friends to Lovers sports