on October 11, 2021
The Simple Rules to Not Fall for My Doc is a sweet, slow burn, low angst romance with the forbidden element of doctor/patient relations...
From the Blurb: 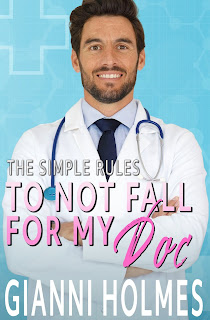 He’s my patient.
He's off-limits.
He's a twenty-one-year-old young man who’s battled with Hodgkin lymphoma throughout adolescence. Given two years of complete remission, Austin Villiers should be out there living his best life. Instead, he walks the wings of the cancer treatment center, spreading hope and smiles.
My patients’ lives aren’t the only ones he touches. His presence reminds me why I chose this path years ago. But, I have feelings for this boy that goes against everything I believe in. He doesn’t make it easy when he reveals his virgin heart belongs to me.
It's been a long time since I've wanted to be called Daddy. Austin brings back all those protective tendencies. But, how can I break the simplest rule of being a medical practitioner by dating a patient?
The Simple Rules To Not Fall For My Doc is a low angst, light daddy kink, forbidden romance between an oncologist and a patient in complete remission. The books in this series can be read out of order.
My Review:
I enjoyed reading this book for the most part.  It was a quick read and I finished it within a few hours.  It had a good plot and the story flowed well for the most part.  This was a good quick read with pretty well developed characters - I think that Austin was a more rounded character than Malcolm, but it was a short story.  The medical situations seemed well handled and seemed to mirror what reality might look like.
I have a couple of sort of spoilers that were my issues...  so if you want to stop reading after this paragraph, please know that I do detail a few concerns down below.   This novella had good length, heat and barring the issues I mentioned, a good plot.   If you're looking for a quick diversion, pick up Not to Fall for My Doc by Gianna Holmes.
Potential Spoiler issues:
I had a hard time with the Dr. Greer name being used throughout the book after the relationship progressed.  I could have seen it in the bedroom as part of their kink, but not the way it was over-used.  I also thought that the end sub-plot was a throw in and should probably have either been left out or expanded...
I also think that the book should have been titled Not to Fall for my Patient... since the person resisting is the doc, not the patient.
3.5 stars Age Gap ARC Daddy Heather KU novella Romance Series steamy sweet