All the stores have their Christmas decor up front and centre so why not start getting into the spirit with some amazing holiday stories, including today's featured teaser from Davey's Christmas Miracle by Rhys Everly!  You only have to wait until Friday this week to read this sweet short story and it's available for pre-order so it will miraculously appear on your kindle! 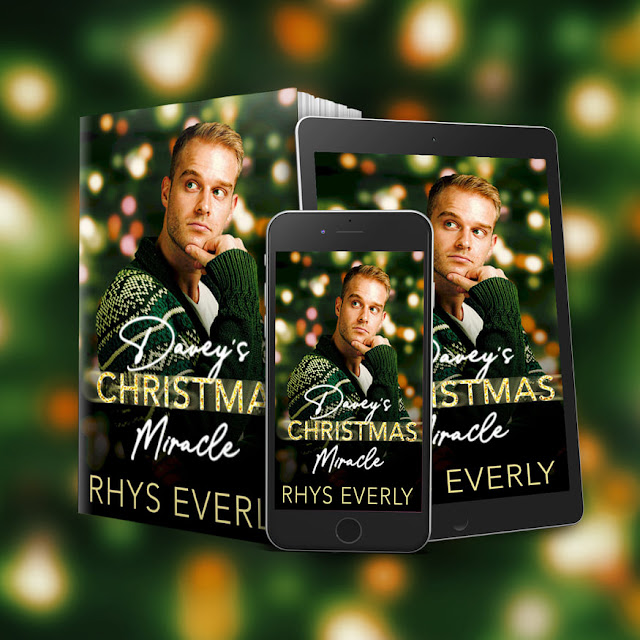 Davey hates Christmas with a passion.
He’s got good reason too.
Everything awful that has happened to him has happened during the most “wonderful” time of the year.
That’s why when he meets a guy who’s seemingly perfect in every way, he doesn’t believe it will lead to anything good, or long-term.
But maybe, just maybe, this year, Davey will get his happily ever after after all.
Davey’s Christmas Miracle is an insta-love holiday novella, inspired by the author’s real-life meet-cute.
*Previously published as Jingle Spell by Chris Ethan.

“Are you okay?” Avery asked him.

“Are you cold?” Another nod from Davey, and Avery stopped him by gripping both his shoulders. “Here, take my coat. I’m okay,” he said and unzipped his jacket.

Avery didn’t follow him. “Davey, you are putting on my coat and I’m not hearing another word,” he raised his voice and made Davey turn to stone.

Had he just ordered him to do something? He turned around and saw Avery holding the jacket in both hands and waiting for Davey to slip into it. Okay, that was hot. He let himself follow Avery’s orders. When he turned to face him again, Avery gripped the zipper and pulled it all the way up.

His hands lingered on the base of Davey’s neck for a moment, and Davey took Avery in. That smile was infecting his face again. The pursed lips, the puppy eyes. Davey couldn’t resist them any longer. He pushed closer and locked his lips with Avery’s. An explosion of emotions burst inside of him, and his cock stirred up without much provocation.

His lips looked small, but upon kissing them, Davey fought the urge to bite the lower lip with hunger. Instead he slipped his tongue between Davey’s lips and asked for permission by licking them.

Avery reciprocated by opening his mouth and putting his own tongue in action. There was tenderness in the kiss. When Avery’s hands cupped his face, it turned to magic. The warmth of his hands made Davey breathless.

That, right there, was perfection. He immediately wished he could freeze time in that moment and savor it forever.

Avery pulled away, slowly but painstakingly nonetheless, and he felt the absence straight away.

This was torture. Kissing those lips and then being deprived of them was one of the cruelest things someone could inflict on him.

“Do you want to grab one last drink?” Avery asked, and Davey smiled.