on October 26, 2021
Book 1 BREATHE and 1.5 EXHALE of the London Love series are live and free to read on Kindle Unlimited and that gives you just enough time to read them before TASTE comes out on November 1st! 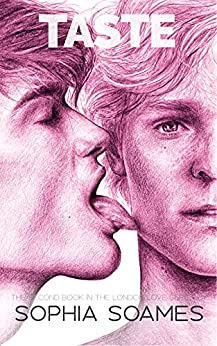 Finn Christensen doesn’t do feelings. He doesn’t do relationships. When he has an itch to scratch, there are always clubs and hook-ups. Quick, dirty encounters in dark places that feed the need that brews in the pit in his stomach. He works every hour of the day as the front office manager for the Clouds Westminster Hotel in central London. He’s a good boss, and he knows his shit.
Then Mark Quinton swans in like he owns the bloody place, and Finn’s carefully managed world starts to fall apart.
Mark Quinton is impulsive and stupid and childish. He’s the last person in the world who should be allowed to run the food and beverage department at the Clouds Westminster, however many brilliant ideas he has and somehow miraculously pulls off. He needs…something. He needs Finn Christensen.
It’s a match made in hell. A recipe for disaster. There will be a bloodbath one day. They both know that. Everyone knows.
Exclusive Excerpt:

Finn Christensen, though, was just that. Textbook dull and insanely boring. The man only owned slick, grey suits, wore the same black tie every goddamn day and needed to learn how to grow a beard. Despite being well into his forties, he had a babyface and a crown of almost angelic blonde curls on the top of his head. He must have mislaid his halo at some point because there was nothing angelic about him.

He never spoke to me, apart from random snide remarks and the trademark eye-rolls he seemed to have honed on me. His thick curls were always a mess of natural perfection, his lips always pursed in a tight scowl, and there were definitely firm muscles showing through the fitted shirts that were his preferred attire. I’d caught him staring at me a few times during these meetings, just a glance, and then he would take a swig of his water bottle and look away. I knew he disliked me. Fuck that—he bloody hated me for some reason I didn’t fully understand.

The problem was, I couldn’t really peg him down, however much I wanted to. He was way above my league professionally, having worked himself up from the ground, gaining experience on the back of some posh hotel management degree. His office displayed an impressive wall full of hospitality diplomas from well-known establishments, and he always looked immaculate, in his bloody posh suit-and-tie combos, while I was happy to slum it in one of my favourite floral shirts and black jeans. I’d heard whispers he’d wanted the F&B gig, but I didn’t believe that. He was the front-of-house manager, which held a lot more clout in the management world than the dude who fiddled around with room service yields and made sure the breakfast service made a profit.

And still he hated me.

I knew he was gay. Everyone did, like they knew I was an equal opportunities kind of guy, swinging freely from having a hot girlfriend to being the man-whore of the moment when I felt that need. We didn’t hold back with those personal need-to-knows in the Clouds hotel world, so we knew most things about everyone in the company. I didn’t even have to fill people in or ask for the low-down because my wait staff were the biggest gossipmongers in the world and happily kept tabs on all the current drama, telling me before things got out of hand, which they did, on a daily basis. Not only did my happily bed-hopping staff shag like rabbits and fall in and out of favour at the drop of a hat, but I had to reluctantly admit to having caused some of that drama myself. My last bed partner had been a woman, but that little affair had conveniently come with no strings attached, like my thrusts usually did.

Hence there I was, staring back at him across the table, noting how his hair was, as always, on the edge of needing a trim. How his angular face lit up in a rare smile at a particularly complimentary comment. The squareness of his shoulders in that well-cut suit. The pout of those lips just made for, well. Ahem. Activities between the sheets, preferably of the kind where he was on his knees with my cock in his mouth. That thought had already been well and truly entertained and had made me ejaculate into my own hands more nights than not these days.

I couldn’t quite pinpoint the time when I’d realised I fancied him. Perhaps even a small part of me wanted him. Yet I could feel the hairs on the back of my neck stand up whenever he was in the room. His voice grated on my nerves to the point where my teeth would grit, and his pompous PowerPoint presentations in these weekly meetings made me sigh a little too loudly.
Which made him stare at me with murder in his eyes. Yup, the feeling was mutual.

Instead of displaying my own totally professional PowerPoint presentation, I found myself standing up and throwing numbers off the top of my head because I was a cocky fucker. And all the while, the almighty Mr Christensen sat scowling with his arms crossed over his chest.

“Christensen, don’t you agree?” I smiled at him. He didn’t smile back. “Was my prediction for the new lunch menu not right on track? You were the one who disagreed with the proposed changes. I’m pleased to see that, once again, I was right.” I sprinkled the words lightly, maintaining my pleasant smile as I took in the room, which was mostly amused stares. This showdown had become a weekly thing, and everyone was eagerly awaiting what would most certainly be a brutal comeback.

Right on cue, Finn Christensen raised his hands in a deliberately slow clap.

“Mr Quinton, congratulations on the one per cent profit you added from last week. Less than one per cent. I am more impressed with the massaging you must have done to come up with those figures, because according to Saffiya’s more truthful calculations, looking at last week’s accounting breakdown, you made a further 392-pound loss on the food side.”
Damn. Now Saffiya, our immaculate financial controller, was nodding as well. So yes, we’d made a bit of a loss, but I’d cooked the numbers well, and the reduced staffing figures and portion size reductions were more than covering those numbers for next week.

“Those losses are already considered, and we look forward to a profit-making food side next week with the introduction of our Incredible Desserts concept. The test customers were raving about them last week, and as always, we welcome visits down to our kitchen to sample our wonderfully talented head chef’s new creations. Ben and his team are truly an incredible asset to the chain.”

In another of his signature moves, he was on his feet before I’d even finished the sentence, showing his displeasure by going to stand against the back wall of the room. It made him look taller, angrier, more confident, as well he knew.

“Come on, Quinton,” he droned. “You’re deluded, and we all know it. Demand for in-house meals is high, but unless you want our customers to cross the square and grab McDonald’s from the corner, you need to up your game. We’ve had several complaints about the lack of comfort food on your menu, and Mr Proctor once again demanded we comp his bill due to the lack of fish and chips. You know how important our premium customers are, don’t you, Quinton?”

He banged his head back against the wall as he spoke, clearly annoyed with my dumbass attitude and overbearing confidence. But that was the way I rolled, and the fact that it seemed to annoy him just egged me on.

“No need to speak to me like I am a child.” I smiled demurely. “But if you want me to break down the figures for you…” I paused deliberately. “Then I can explain like I would my five-year-old niece’s maths homework. We made a profit overall and scored 4.92 on customer satisfaction. Seventy-two per cent of last week’s guests took one or more meals in our restaurant.”
“We offer free breakfast, mate,” he cut back. “Which means twenty-eight per cent of our clients couldn’t face our breakfast. Not a particularly good score.”

Pre-order your copy of TASTE today!