Gentry's #Doms, like the first in the series, deals with some heavy topics.  But, 90% of it is sweet, and deals with Gentry’s recovery and self development.  The trigger warnings are mostly for the epilogue, which could absolutely be skipped if that kind of thing bothers you as a reader. 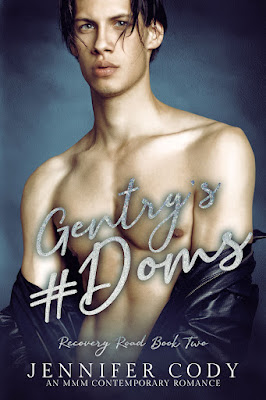 The only thing I’ve ever wanted in life was to serve others. I know myself; I’ve read every self-help book on personal growth I could stomach. My main love language is acts of service. I like helping others. There’s nothing wrong with wanting to be subservient; I’m not weak because I prefer to let someone else take charge. I’m not weak. Except, I am. I’m an addict and I’ve hit rock bottom. All I want is someone to take control and help me stop hurting myself.

Contentment in life might be the most underrated ideal. Happiness is great, but only comes in fleeting moments: a quick smile on your face and laugh in your heart. Contentment is long term and sustainable. It’s habits that make sense and personal growth that keeps you on an even keel. I love my life; I’ve found contentment with a good job, good dog, and good friends. At least that’s true until this little slip of a man who wears skirts and responds better to commands than questions comes into my life with a bang. I didn’t even know I needed him, but I know I’m not enough for him.

After a decade on the ice, drilling for oil on the northern slope of Alaska and traveling the world in search of adventure and some kind of life, it’s my twin, living in our hometown, who finds the future I’m looking for. I ran to Alaska because kids do dumb shit; I ran to the Slope because Alaska wasn’t far enough to escape myself. I’ve grown up since then, discovered who I am, and now I’m about to run home, because I won’t be the one to stand in the way of my dreams coming true..

Gentry is so sweet, and lost.  His inner pain manifests in self harm as well as putting himself in harmful situations.

Jericho is a hardware store owner who’s satisfied with his life, until he meets Gentry in the most awkward meet-cute ever.

Salem, Jericho’s twin, comes in a bit later.  He’s an experienced Dom and tries to guide Jericho as best he can from a distance, but soon realizes he needs to be there in person for them both.

This author has an uncanny way of writing realistic and imperfect characters who don’t miraculously get better just because they’ve found their perfect partner, or partners in this case.

To be clear, there is no sexual relationship between the twins in this book.  Gentry is always between them.

Overall, I loved Gentry's #Doms and the realistic challenges they face as a team.  The support that comes from each partner is beautiful!

Heat: 7/10 (lots of sexy naked times but written in a way that develops the story)

Tissues: 3/10 (there are some difficult parts that might choke you up)

Storyline 8/10 (well developed.  I love that the conflict comes from outside the relationship and not hesitation on the part of the main characters)