Fairy and Impartial by Meghan Maslow

on October 02, 2021
Fairy and Impartial is the fourth book in the Starfig Investigations series and just as good as all it’s predecessors.
From the Author: 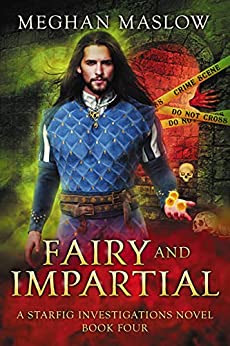 All Twig Starfig wants is to settle into mated life with his wizard and be a good leader to his clan. No drama. No heartache. A happily-ever-after fit for a dragon. Or half-dragon, at any rate.
Instead, Twig and Quinn get roped into a new case involving missing orc stones. Yes, those really are a thing. Twig’s dad is on the PR warpath . . . again. Quinn's little brother can't seem to stop pining over their housemate. Someone—or something—seems to be following them. And getting quality time alone with his wizard is more difficult than keeping one’s virginity at an incubus party.
To make matters worse, Twig's old enemies start dropping like fairyflies, and they find themselves smack in the middle of an inconvenient murder investigation with a certain red fury as the main suspect. With everyone in Lighthelm convinced of Bill’s guilt—and by association Twig’s—Starfig Investigations is on the case.
Is there no one in the Elder Realm who’s fairy and impartial?
Tammy's Review:
There are two different mysteries in this one: who stole the Orc Stones, and who’s framing Bill for murder.  To say there’s a lot going on in one book is accurate.  I think it might have been better as two separate books, but overall the story worked well tying up both storylines.
The world that Meghan has created in this series is intricate and creative.  I love Quinn and Twig and there mishmash of family members they collect everywhere they go.  Dandy the Tworc (twink/orc) is a funny, unique character who will be a great addition to future books in this series.  Poor miss understood Bill the red fury is being framed for murders.  I hope he gets a book of his own eventually, I’d love to get to know him better.
Fairy and Impartial:
World building: 9/10 (well developed over the series, I definitely recommend reading them in order)
MC development: 10/10 (well developed and left me wanting more)
Heat: 5/10 (the books in this series aren’t high heat, poor Twig and Quinn get interrupted a LOT)
Length: 8/10 (maybe a bit long, but I’m not really complaining about that)
Editing: 10/10 (I didn’t notice any mistakes or typo
Humor: 6/10 (definitely had me chuckling in spots)
Overall: 10/10 (would highly recommend)
5 Stars ARC Fantasy KU PNR Series Tammy