K.C. Wells is always a one-click author for me, so it will come as no surprise that I absolutely love Dylan's Dilemma!  Whether you've been following the Maine Men series or you are going to read this as standalone, it will work, but why not start the series from the beginning (they're on KU) and treat yourself beginning with Finn's Fantasy.  You'll also find my reviews for other KC Wells titles including books 2 & 3 of the Maine Men series here, but I digress and what you really want to know is all about the delicious Dylan and his Dilemma... 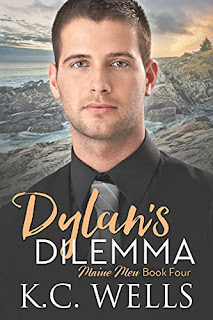 Dylan has been curious for a long time, but is he ready to confront his desires?
A difficult decision
Dylan Martin has worked in the same Ogunquit hotel since he was eighteen, and he knows the drill: anything that might damage the hotel’s reputation has to be reported. So telling the uptight manager there’s a gay porn shoot about to take place should be a no-brainer.
Except Dylan recognizes one of the performers. He’s been watching Mark Roman’s scenes for so long, he could describe every inch of Mark’s ripped body, from the silver at his temples and in his beard, right down to the tattoo on his ass. Not to mention Mark’s sexy smile that sends heat hurtling through Dylan every time he sees it.
But if Dylan says nothing, it’s his job on the line. And then his hand is forced…
An eager student
Mark’s shoot is a bust but there’s a silver lining, in the shape of a cute, sexy guy in the local bar. Except the guy seems familiar—and nervous—and suddenly it’s clear who let the cat out of the bag. When Mark jokes that Dylan owes him a scene to make up for it, Dylan refuses point blank, but the longing in his eyes is hard to ignore: Dylan obviously wants him, even if he can’t bring himself to say it.
Mark wants to be the one to undress him, to show him how sensual a man’s kiss can be. He wants to set Dylan on fire, to make him shudder with pleasure. Most of all, he longs to hear his name on Dylan’s lips when Mark brings him to the edge.
It won’t be any more than that. Mark’s ‘career’ has proved a stumbling block in the past, and he doesn’t expect Dylan to be any different.
Mark may know a lot about desire, but Dylan’s about to give him a lesson in love.
Heather's Review:
I honestly don't know how long Dylan's Dilemma took to read... I started it and finished it in one sitting and I honestly barely moved, it pulled me in and held me from the moment Dylan started thinking until the end of the epilogue went by in the blink of an eye.  I can't say I am surprised - KC Wells has a talent for taking her characters and readers on a journey of discovery in every book she writes.  Dylan and Marks' journeys are captivating reading and their evolution is both amazing and enjoyable to read.
One of the things I love most about KC's writing is that she doesn't invent a huge crisis at 80% that tears the characters apart, not that she doesn't create tension in her books, it's just a natural part of the ebb and flow of the story, not a huge out of place scene...
As I said in the opening, you can easily read Dylan's Dilemma as a standalone story - any side character development is easily explained in the text, but you'll have a richer experience reading the book in the context of the friends circle of Maine Men and enjoy three other well crafted and beautiful stories of men finding love.
Warning: While not a part of the MC storyline, the book does include sex with multiple partners as part of Mark's career.
Rating: 5 Stars
Miki J's Review:
“I want you to touch me.  To look at me as if I matter.”
Dylan’s turn !!  He’s an adorable character…..trying to work out his life and then bam, he meets is favourite porn start.  I loved the fact they start with a friendship – it’s very sweet.  This leads into questions and how Mark helps him with his journey – nicely done….and very steamy !!  Then there is the background stories of both Dylan & Mark – oooph….sometimes it is better with people you make as your family, not the ones you are born into.  There a bit of hurt/comfort, angst and tenderness.
Rating: 4 Stars
4 Stars 5 Stars Age Gap bi awakening Heather Miki J Series steamy