Cuddly Wolf offers a unique idea for the book, but find out if Laora and Marie feel if it lived up to its full potential. 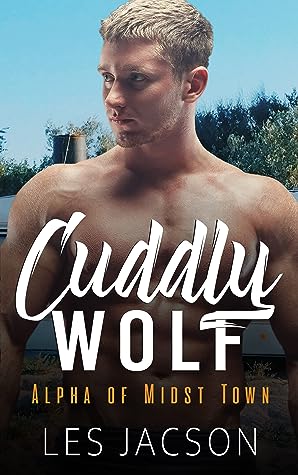 I lived alone in my small house in Jackal Park. Until one day, my straight neighbor was suddenly on my couch.

His name was Alpha, and I'd be lying if I said he wasn't hot. But the next time he was at my door to apologize, he killed a werewolf with his bare hands.

What was he? He better not be an enemy of my best friend, Champ. Because I'll do anything to look after my wolf-friend, even if it meant killing my hot neighbor.

I had a simple dream of starting my family and having kids. Although my girlfriend didn't like the idea.

If only my best friend was my fated mate, I wouldn't have this problem. He would be the perfect wife for me.

Ever since I was a little pup, I promised to keep him safe. Yet, I also had to juggle my time with work and the responsibility to protect my people. So if one day I was suddenly on his couch, I hoped he wouldn't freak out.

I started to read this book after reading the blurb and thought I would enjoy it.

However I am sorry to say I found the worldbuilding lacking, some of the writing offensive, calling Imane houeswife/ wife, and the use of language severely lacking. English is not my first language, but I found the structure of sentences and the word usage strange I had trouble getting to the end of the book because of all the stated reasons and found I could not focus on the storyline. I wish the author had taken the time to restructure the book I don't know if an editor was involved, but I would advise to pull the book, rework it and re-release it at a later time.

I give the book 3 stars since I appreciate the effort it took to create the story and I just refuse to grade lower.

This is a little bit of a different than I'm used to reading. It is a shifter book but not a M pregnancy book the storyline was very written and well-developed. One of the main characters has a friendship with a wolf and didn't know he was a shifter at first. You are very cute and sexy moments throughout the story. was a new author to me and I was very impressed with him. I will be reading more of his stories.