Laora is following the Vargr saga for our blog and shares this review and insight into Awakening Ember:

"Properity can't grow out of divison, " Matt said. Hope can't blossom when dreams of the individual are limited by those in power. Unity is needed for the foundation of both." Matt breathed faster as the ember grew steadily warmer, and it filled Matt up with determination. 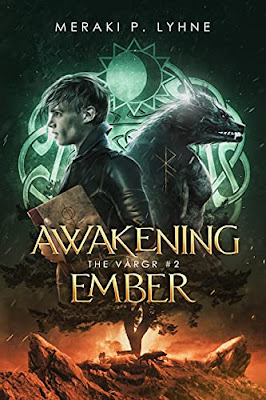 The belief in the old gods of Norse mythology may have been suppressed by Christianity, but that doesn’t mean the races of old didn’t survive. Like the Vargr wolves.
All his life, Matt had been alone with his mom, but the Vargr in him responds quickly to meeting his pack. His relationship with his lover Rasmus evolves, and he’s grown tight friendships with the other Vargr pups.
Matt has also started Alpha training and is being taught and guided in what that means for him and the ember that awoke in him far too early.
Pack Alpha Steffen keeps a close eye on their new pup and the powerful ember Matt arrived with. It worries him—not just for Matt but because of the lore and history of how the Vargr pack Sköll Hati had gotten their name.
He senses trouble on the horizon. When Matt’s ember reacts violently around a Geri Freki Alpha, Steffen must step in and step up. The trouble that lands on his doorstep is but the beginning of whatever he fears lays ahead.
Laora's Review:
Awakening Ember is probably one of the best sequels I have read in a long time. The world building continues and the differences between humans and other Vargr societies become clearer.
Both Matt and Steffen work hard on themselves to control their embers. I am so looking forward to boom tree. I can't wait to see who and what Matt becomes and the other pups with a burning ember. I can't wait to find out what will become of the Vargr world as it stands now.
Awakening Ember is not a standalone and this series needs to be read in order - please check out Laora's review of book 1, Slumbering Ember and then also check out what comes next in book 3, Whispering Ember with our cover reveal and character interview!
5 Stars Laora PNR Series