on October 28, 2021
A Totally Platonic Thing was a good story, but a little too much angst for me.  It a Best Friends to Lovers, College/New Adult story featuring Chris and Lucas... 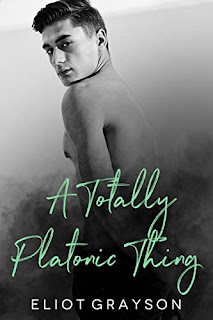 Friends know all your faults and love you anyway. But what happens when you cross the line between friends and…more than friends?

Chris
My straight roommate and I are totally not dating. Sure, Lucas and I watch videos together—yes, those kinds of videos—and sometimes fall asleep in the same bed afterward. And yeah, I bring coffee to his lab every day so I can get my hug fix. But at night, I’ve been out clubbing and trying to forget that my ex-boyfriend was using me. I'm so lucky Lucas puts up with my drunk shenanigans. Until he doesn’t—and makes it impossible for me to hide what I really want. But it’s all platonic. Right?

Lucas
Chris means everything to me and I’d do anything for him. But one too many middle-of-the-night rescue missions with him falling-down drunk makes me lose my temper. Bigtime. Once he's sober, I threaten to put him over my knee and give him what he deserves. I expect him to tell me to go to hell…but instead he blushes and squirms. He wants it. Badly. And now I don’t know what to do. It should’ve been a one-time thing. But seeing Chris that way—touching him that way—has me hooked. Because my own reaction isn’t exactly platonic either…

A Totally Platonic Thing is a steamy M/M new adult bisexual romance with two roommates who are totally, like, not dating. At all. Even though they’re basically an old married couple. And also the adult videos and the, ahem, discipline. But that doesn’t count. HEA guaranteed.


Tammy's Review:
I love Best Friends to Lovers, it’s absolutely my favorite trope. This was a good book, but it had a bit too much angst for my preference. If the issue could be resolved with one conversation, or even a couple offhanded comments, it irritates me. This story definitely fell into that trap. It was still an enjoyable read though.

I loved Lucas and Chris’ dedication to each other. I liked that they faced challenges together and had a lot in common. I really liked Lucas protecting and taking care of Chris.

I did not enjoy the lengthy inner monologue of both characters. I was excited and enjoying the book until about 30%. I started skimming the parts without dialogue. There is no sext times until about 55%, and even after that, Lucas is still claiming he’s straight. There was a terrible lack of communication between them both after that as well. The story does pick up again around 65%, so there’s that.

If you enjoy angst and a lot of emotional upheaval A Totally Platonic Thing is probably a good story for you.

Heat: 5/10 (starts later in the story, but there’s still denial about Lucas’ sexuality)

Character development: 8/10 (they both seemed pretty well developed and had their own personality quirks)

Overall:8/10 (would cautiously recommend if you enjoy angst)
Heather's Review:
I am a sucker for a sweet GFY Best Friends to Lovers trope, but this one had me shaking my head in several places... the angst and the lack of communication between the MC's was tough on my heart and my soul...  I was also struck at how the relationship changed but the characters didn't and that again made me want to put the book down...but I stuck through it for Lucas & Chris' HEA and if you are looking for an angsty New Adult read, than I think you will too...
Rating: 4 Stars
4 Stars angst College Contemporary Friends to Lovers Heather Series Tammy