#ThrowbackThursday - Purring with His Mate by Shea Balik

on September 30, 2021
How far did we reach back for this amazing Throwback Thursday?  We went all the way to 2017 to shine a light on Purring With His Mate!  This is the book that started the entire Miracle series, which has 14 stories over the last 4 years!
The Blurb: 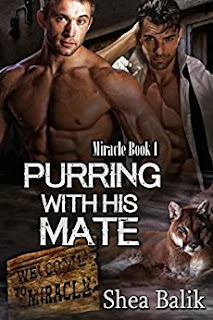 In a world where everyone was against them, they needed a Miracle. What no one had expected was to find their salvation in an abandoned town that was ready to collapse. Yet, that is exactly what happened when they moved to the town of Miracle, Oregon.
Edrick Rapp, a mountain lion shifter, wanted to kick himself for not moving he and his friends far from their former pack years earlier. It wasn’t until he came upon one of his friends being beaten to death for their sins that he realized his mistake.
Mouse shifter, Nole Hayward, had been punished by his Alpha. Left for dead, he barely managed to crawl away with his life. He ends up hiding out in Miracle, Oregon until a group of mountain lion shifters show up. Before he could get away he ends up with a building collapsing down around him and his mate rescuing him.
Can Edrick and Nole find love or will they let the ghosts of their pasts tear them apart?
PLEASE NOTE: Although each book in this series focuses on one couple and their HEA, the overall story arc is better enjoyed if read in order."
An extra peek inside:

Quickly, they whittled down the numbers to two, the leader and one wolf, who seemed determined to protect his alpha at all costs, including pinning Nole to the ground, forcing Edrick to freeze or risk his mate dying.

“I see you’ve allowed yourself to become weak,” the leader sneered with a way too triumphant smile on his face.  “Mates will get you killed, something you will experience firsthand.”

Edrick stared at the wolf who had one paw on Nole’s throat, claws just piercing the skin.  The scent of his mate’s blood had Edrick’s cat hissing as rage consumed him.  Hudson hadn’t taken the shot he easily could have to kill the wolf for fear the creature’s claws would rip Nole’s throat out.   Another thing a shifter didn’t recover from.

Focused on his mate, Edrick watched in horror as Nole’s hand slowly made its way down to his hip to pull out a very sharp looking knife.  He needed to distract the wolf or Nole’s actions would be noticed.  In his mountain lion’s form, that would be hard to do.

“Now, tell your shooter to get down out of that tree, or I’ll have Octo drive further into your mate’s throat until he’s coated in blood,” the leader said, even as he pointed his gun at Edrick’s head.

Edrick may not be able to communicate to his men in his shifter form, but the advantage of training together since the age of five, they didn’t need words.  Edrick glanced from Nole’s hand that gripped the knife, to Lucca, and gave a nod.

Lucca gave an imperceptible nod as he acknowledged seeing what Edrick had.  “Fine,” Lucca spit out.  Then he glared at Edrick.  “I told you we should never have come after the mouse.  I mean, you’re a cat.  What the hell were thinking that you could mate with a such a lowly creature?”

Both the leader and the wolf stared at Lucca in surprise, but it was all the distraction Nole needed to lift the knife and slam it right onto the wolf’s paw, severing it in one clean swipe.
At the same moment that the knife separated the wolf’s paw, Hudson fired, and a bullet slammed into the wolf, leaving a hole right between its eyes.  The leader snarled before opening fire, but Edrick had already leaped toward the man, slamming into him and dragging him to the ground with his teeth embedded in the man’s throat.

Now the best part!  Purring With His Mate is FREE on all platforms!  I've linked it to Amazon, but you can find it everywhere for no cost!
About the Author:

Bestselling author of the Cedar Falls Series, Hart Medical Center Series, Miracle Series, and Paranormal Wars Series, Shea Balik has always had a vivid imagination with stories running around in her head. Often her stories are taken from observations of other people with her own spin. Traveling is one of her favorite ways of fulfilling her passion of people watching. You never know, one day you may spark her imagination for her next book.
Whether at home or traveling she is usually in front of her computer writing or curled up with a good book. Find Shea at any of the links below!
www.sheabalik.com
https://linktr.ee/SheaBalik
If you have a book that has been published for 6 months or longer and want to be featured in a future #ThrowbackThursday, please complete this form https://forms.gle/csqPmEwTNWfgKAuDA
#ThrowbackThursday