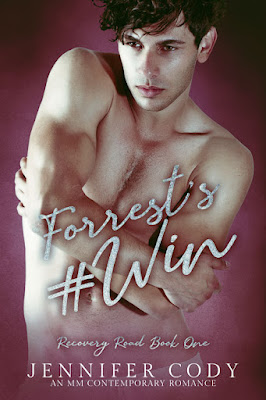 In anticipation of book two in the Recovery Road series, Gentry's #Doms, we'll be talking about book one, Forrest's #Win!

Half a year ago I put out a want ad for a PA. The first person to respond showed up at my door with everything he owned and never left. I knew I’d hired the right person immediately. Since then, Blake has become my best and closest friend. I trust him completely because Blake never lies to me.

I have no qualms asking him to help me find a casual hook-up so I can explore my preferences. We didn’t expect a rendezvous for sex would turn into a nightmare. I don’t know how I’ll ever recover, but I know I can’t do it without Blake.

I didn’t know until I met Forrest how good a structured life could be. He lives and works by his schedule, and I keep it for him. When he asks me to put a hook-up in his schedule, I take care of it. I don’t think twice. I’ve never had any problem with any dating app, why would I expect one now?

I should have been more careful. I should have vetted his hook-up before I let him go off by himself. I should have done anything other than what I did. I don’t know how Forrest can stand the sight of me, but he needs me now, and I won’t let myself fail him again.

Forrest’s #Win is a 60k Contemporary MM, Bestfriends to Lovers Romance with a well-earned Happily Ever After. Triggers include: on-page descriptive (non-erotic) rape, and stalking.

Something Annette just said makes my brain do the record scratch. She was talking about assignments for this week and she said—

“What did you say?” I ask, interrupting her.

She furrows her brow at me. “What part did you miss?”

“You said something about going on a date?”

She smiles affirmatively. “Yes, you and Forrest should plan a date night this week. We haven’t talked about it, but when he’s ready, we’ll talk about how to approach sex, but for now, I think it would be good if you two started back up with your weekly dates.”

She’s talking about the one night a week we used to go out rather than me cooking, but why does she think we’re dating? “We’re not—I mean, I’m not gay, Annette.”

I don’t think any sort of mental discipline could have kept the surprise off her face at that moment.  “You’re not a couple?” she demands, turning red.

I shake my head.

Forrest sits  in his usual seat, listening to his current book, and I tap his knee to get his attention. He pulls his earbuds out and looks at us. “Time isn’t up,” he states matter-of-factly.

“Annette thought we were a couple this whole time. Did you tell her that?” I ask, though I don’t think Forrest would say that kind of thing.

Forrest shakes his head. “Of course not,” he looks at her expectantly. “Why did you think that?” 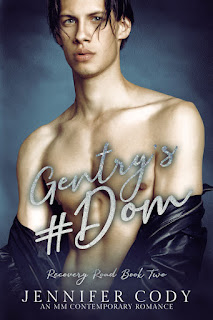 Jennifer Cody lives in Small Midwestern Town, USA, aka the sticks of Kansas. She has three kids and a Beardo she loves. Her sleep schedule is weird, so messages sent at midnight usually get answered relatively promptly. She reads all kinds of mm romance and urban fantasy, but her favorites are gay-for-you, small-town romances and over the top urban fantasy romances. Her own writing doesn’t always reflect her reading preferences, but mostly it does. She writes what she wants to read and reads extensively because she’s an addict. To books, obviously. And caffeine because sleep is for other people.

Gentry's #Doms will be coming in early October. It turns out Gentry is a greedy submissive who needed two Doms so his edits are taking a little longer than anticipated. This lucky sub does get his two Doms in the form of a pair of redheaded Scottish twins. Meet Gentry in Forrest's #Win before you get to read his story.

You can find Jennifer here: