Taste & Depend on Me (Donnie & JJ Series) by Christian Williams

Christian Williams’ Donnie and JJ duology – Taste and Depend on Me – delivers a romance in two parts: finding love and choosing love. 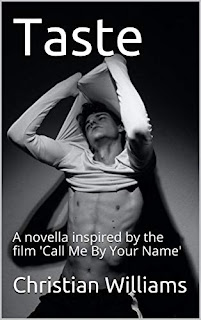 JJ and Donnie are two lost souls from different worlds, brought together by a film that changes their lives.
18 year old JJ dreams of escaping from the North London tower block he shares with his emotionally absent mother and her abusive boyfriend. Donnie is a successful accountant in his mid-30s struggling to deal with the breakup of his marriage and his failing relationship with his 15 year old daughter. Both JJ and Donnie become entranced by the film 'Call Me By Your Name', a passionate love story featuring characters remarkably similar to themselves. Could they end up writing their own love story, or will their pasts and their futures end up tearing them apart?
This powerful novella explores the passions and pitfalls of love in the modern age, as the two main characters dreamily live out their erotic fantasies before having to decide whether their destinies lie together or apart. 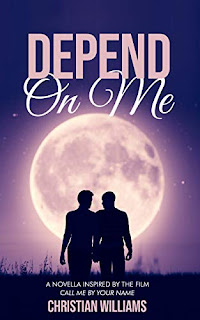 Depend on Me Blurb:

It's been over a year since JJ and Donnie's passionate affair. They each try to start a new life following the seismic events caused by their unexpected relationship and heart-rendering split. Yet both men are struggling; Donnie is in serious debt and in trouble with the law, whilst JJ is in the grip of obsession and addiction. Could it be that the young JJ and the older Donnie actually need each other after all, in order to prevent their lives completely falling apart?
This is the second in the series of the 'Donnie & JJ' romance, originally inspired by the film 'Call Me By Your Name'.
Sarah C.'s Review
"When we first meet Donnie, he’s a thirty-six-year-old accountant who is recently divorced from his wife after cheating on her and estranged from his teenage daughter. He exists. He is not necessarily happy with his life, but he acknowledges that it is a good life. Until he watches the movie Call Me By Your Name on television one night and it changes everything, fully lodging into his brain and fantasies. The movie is how he meets eighteen-year-old JJ, a rough around the edges teenager with an old soul who lives with his mother, her volatile boyfriend, and his older brother, Aron. They start discussing the movie and conversation drifts to more.
When it becomes impossible for JJ to live at home anymore after an altercation with his mom’s boyfriend, Donnie gives him a place to stay and they embark on a summer of passion. The second book picks up a year later. The men have not seen one another in a year and they are far from the people they were when they were together. The story changes then to a second-chance romance.
Williams has an amazing voice in their writing. Their prose is absolutely beautiful and these two novellas were easily some of the prettiest writing I’ve read all year. It lures you into the story and makes you want to stay there. Their characters are not always the best in terms of people, but they are incredibly compelling and she writes them in such a genuine way that even while you want to beat them upside the head with a 2x4, you root for them. They have an amazing gift and it is on full display throughout this duology.
I did give this only a four star rating because the first 20% or more of the first book is a love letter to Call Me By Your Name and how it affected the characters but with an unfortunate tendency to wax poetic over the movie rather than develop the characters early. It is worth getting through that part though, because once the story really kicks into gear, it is compelling and lures you in, hooking you until the last page. The second book also suffered from a strange timeline in the first half, narratively moving between past and present without any indication to the reader until several paragraphs into each scene. This can be incredibly jarring while trying to read it.
However despite these flaws, this book is incredibly recommended. This series has a medium to high level of angst. The steam is incredibly poetic but tends to be on the medium to low side. The two books pair well together to allow Donnie and JJ a happily ever after that sates the reader and holds interest until the very end."
Trigger warnings: sexual assault (book one), domestic violence (both books), murder (second book), drug usage (second book), general violence (both books)
4 Stars Age Gap ARC New Author novella Trigger Warning