Spare Time: The Trouble With Triads book 3 by E.M. Denning

After reviewing Spare Parts, I was excited to get the third installment of The Trouble With Triads, Spare Time.  These books are all standalone romances that feature triads, but are not interconnected, so you can pick up one or all. I may be biased and say read them all, and think you should too! 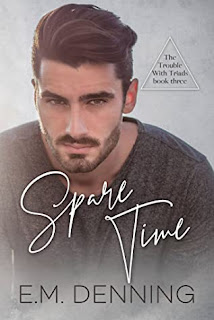 Tired of the men his sister sets him up with, Connor takes his love life into his own hands when he meets not one but two men. They both happen to live in his building. And they’re both already... well acquainted with each other.

On the backside of a divorce, Ethan is ready to move on but not sure he’s ready to date. He’s excited to be on his own, and he could use a couple of new friends, but Lucas and Connor make him want more.

Being a workaholic has never bothered Lucas because he’s had nothing better to do with his time. But now, with Connor and Ethan, Lucas is rethinking every decision he’s ever made. Lucas faces family drama, a job he hates, and a life he’s not sure he wants. It’s time to decide if he’s ready to walk away from what’s expected, take a chance, and find time for an unconventional but pivotal love.

I love the guys and the places they start from - none of them outwardly looking for a relationship, but all secretly wishing for one.  The story is told from all 3 POVs and that helps get inside each man's headspace and understand how he sees the growing friendship/relationship.  E.M. Denning is a master of bringing three men together at the right place at the right time for a relationship to develop naturally.

My minor complaint is in the jumps in the timeline - it felt like sometimes there were long pauses in the story without explanations of why we jumped ahead.  I even went back to see if I missed a chapter in one place...  I also would have liked more development/discussion of their relationship going forward - it ends on a high note, but an epilogue would have been nice too...

This wasn't my absolute favourite book of the series, but it was a great read and I highly recommend it to anyone who loves a low angst triad!