Playing It Safe by Amy Andrews

Playing It Safe is in a word, safe.  That's not to say that there isn't some well placed heat, but the book could be a textbook in the athlete coming out trope.  This review contains general spoilers - skip the spoiler paragraph if you don't want to know the flow of the trope. 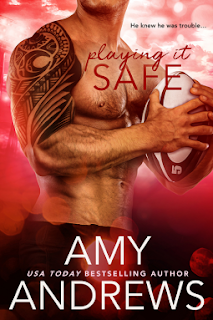 Donovan Bane loves playing rugby for the Sydney Smoke. And if that means he has to keep his sexuality a secret, that’s a sacrifice he’s prepared to make. At least until after he retires, anyway. He doesn’t want to be the first pro rugby player in Australia to officially come out while still playing. The team doesn’t need the media shit storm and he’d rather be known for his footy skills. Which means no dating, no relationships, no sex. Nothing but playing ball.
Until one man suddenly changes everything…
Beckett Stanton is out and proud—and not looking for a guy who isn’t. Been there, done that, complete disaster. Unfortunately, on the first day of his new job working for the Sydney Smoke, he locks eyes with Donovan Bane and he’s a goner. Big, gruff, and athletic isn’t usually Beck’s type, but for some reason this man is ticking all his boxes. And it’s clear the feeling is mutual. It’s also clear that Donovan is not out, and doesn’t plan to be anytime soon. Still, Beck can’t resist being the man to show Donovan everything he’s been missing.
For the first time, Donovan doesn’t play it safe and allows himself to indulge in things with Beck he knows he can’t have. But when their relationship gets serious, he knows he has to choose between the career he loves and the man he loves, because how can he possibly have both?
My review:
The pluses - Playing It Safe is a very well written book with excellent flow, well developed characters and RUGBY!  You may know by now I am a a sucker for a good scrum.  Donovan and Beckett, as well as the cast of teammates, WAGS and friends are great and you feel like you are immersed in the world of the Sydney Smoke. Even the sex scenes are on point and the development of heat was great!  Back when I was reading more M/F romance, I read several of the Sydney Smoke series and enjoyed them.  This is the only M/M book in the series.
***Spoiler alert - don't read the minuses if you don't want a plot summary***
The minuses - there's nothing new here - if you regularly read M/M romance, particularly sports romance, you can predict exactly how this trope will play out.  Boy hides in closet, boy meets boy, things get heavy, feelings are involved, they break up because boy hides in closet, boy can't function, coach notices, boy comes out and they live HEA- there is nothing surprising or wow for readers who choose this as part of the larger sub-genre.
***Spoiler completed****
That being said, Playing It Safe is an excellent gateway book - I expect that there may be some new M/M readers who join our ranks, based on this being their first foray into the gay romance world.  It certainly does it's job in that respect.  If you're looking for a book that safely introduces a M/F romance reader to the M/M genre - this is going to be a top pick for that role.
4 Stars ARC Negalley Series sports steamy