I have been completely entranced by Mia Monroe's bisexual awakening series , Friendship and Desire, featuring mature men since it started with Dirty Forty and continued with Chasing Fate, which I reviewed on the blog earlier.  I pulled the latest installment, Fancy Free to the top of my personal TBR and devoured it last night! 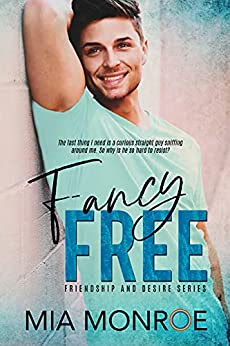 From the Author:
The last thing I need is a curious straight guy sniffing around me. So why is he so hard to resist?
My life is everything I ever wanted—by design. Being one of the nation’s most sought-after wedding planners has led to a life of traveling to glamorous locations, bumping elbows with the rich and famous, and sampling every handsome hunk the world has to offer. I gave up the idea of happily ever after long ago, embracing my single status.
I was completely fulfilled until Luke barreled his way into my life. He’s jaw-dropping, can’t-take-your-eyes-off-him gorgeous, but alas, he’s as straight as they come. According to Luke, he was never into men before he met me. Flattering, but I’m not going there again. Been there, done that, have the scars to show for it.
I insist on an arm’s length friendship. It’s the right thing to do. As tempting as it is to help him explore, I simply don’t have the time or patience. That is until he kisses me. It isn’t long before I’m wondering if I’m ready to give up my Fancy Free life and take a chance on an unlikely forever. But if I do, will I get my heart crushed once again?
Fancy Free is a friends-to-lovers, bisexual awakening, steamy romp featuring a fabulous but reluctant wedding planner and his curious but inexperienced suitor. It’s book three in the Friendship and Desire series featuring men discovering that maybe they were always more than friends.
Heather's Review:
Unlike the previous installments of this series, the characters don't know each other before their first encounter.  I love how Mia Monroe foreshadows their meet cute by having Luke talking about what he wants from a relationship with his friend Diego.
New relationship miscommunication, unrequited love and broadened horizons are woven into the story that just pulls you in and holds to until you finish this book.   I really love Luke as a character - laid back, forthright and so open to new experiences - he really is the epitome of go with the flow.  Hayden is brash, sassy and wary, setting up an opposites attract scenario that will have you swooning several times over.
The pace of the book is realistic too - they don't go from kissing to bisexual bottoming in 30 seconds or less, like some books seem to.  It really feels like you're getting a glimpse into real lives and Mia Monroe takes the time to acknowledge when characters need space and time to take everything in.
Fancy Free can easily be read standalone, but since I've 5 starred the entire series, I highly recommend you start with Dirty Forty and enjoy all three of these amazing bisexual awakening stories featuring mature men who figure out what they want and go for it!
5 Stars bi awakening Contemporary Heather KU mature characters Romance Series steamy