Sometimes a surprise comes along and you just need to make time for it... my personal TBR is always long, but when I spend most weekdays reading review books, I have to sometimes be judicious with my personal time... and this month the balance will be even tougher because I've also added the read a series in a month challenge, but there was one book that shot to the top of my list based on the reviews I've seen all over the social webs, so my guilty pleasure read this long weekend was Dearest Milton James by N.R. Walker. 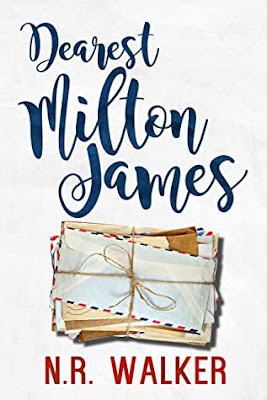 Malachi Keogh finds himself in a job he neither wanted nor asked for when his father, boss of Sydney’s postal service, sends him to the end of the business line, aka The Dead Letter Office. Malachi expects tedious and boring but instead discovers a warehouse with a quirky bunch of misfit co-workers, including a stoic and nerdy boss, Julian Pollard.
Malachi’s intrigued by Julian at first, and he soon learns there’s more to the man than his boring clothes of beige, tan, and brown; a far cry from Malachi’s hot pink, lilac, and electric blue. Where Julian is calm and ordered, Malachi is chaos personified, but despite their outward differences, there’s an immediate chemistry between them that sends Malachi’s head—and heart—into a spin.
To keep his father happy, Malachi needs to keep this job. He also needs to solve the mystery of the pile of old letters that sits in Julian’s office and maybe get to the bottom of what makes Julian tick. Like everything that goes through the mail centre, only time will tell if Malachi has found his intended destination or if he’ll find himself returned to sender.
My Review:
OMG, I needed this book - it was such a wonderful balance of sweet, funny and social commentary that I was quickly drawn into the world of the Dead Letter Office and it's cast of misfits.  It felt like a place where I'd want to work!  The main characters are well fleshed out and well written, and you are able to picture all of the co-workers they interact with every day. The integrated mystery of the Dearest Milton James letters made it poignant and hopeful at the same time.
You ALL need this book - and it needs to go to the top of your TBR!  I don't care if you usually read shifter PNR or high fantasy romance, you will be drawn into the story of Dearest Milton James and you won't want to put it down until you reach the very end.  It's a standalone, so you don't have to worry about me making you work extra hard for a new series, but I repeat, you need to fit this book into your TBR soon!
5 Stars Boss Friends to Lovers Romance