A Touch of Fever - Nazri Noor

Starting out as a pseudo enemies to lovers almost lost me, but it quickly became apparent A Touch of Fever is a second chance, friends to lovers. 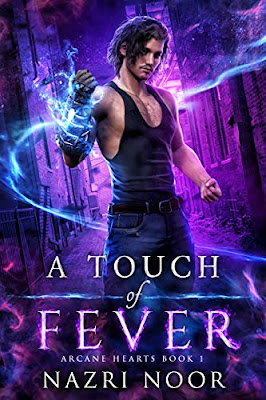 What do you do when you can’t cast spells? You make your own magic.

Jackson Pryde was never great at wielding magic. Instead, he works as an artificer, crafting enchanted devices in the Black Market, a shadowy bazaar of wonders. But Xander Wright, the mouthy, pretentious mage next door, hates all the hammering in Jackson’s workshop.

When a chance assignment forces them to team up, they discover a terrifying predicament. Something is driving members of the magical community into murderous rages. Jackson and Xander must combine might and magic to find the source of the Fever and stop it. Can they put aside their differences long enough to end the Fever, or will they succumb to its bloodthirsty curse?

A Touch of Fever is a 70,000-word M/M urban fantasy romance with a HFN ending. Join a fast-talking artificer and a snarky sorcerer, best friends turned bitter enemies, as they navigate an adventure filled with strange flora, mythical fauna, and magical murders. If you like your urban fantasy with humor, horror, and a whole lot of heart, you’ve come to the right place. Experience A Touch of Fever today.

I enjoyed the story as it unfolded from the point of view of Jack. He was struggling to find his place in the Black Market, an alternate realm that exists both within and outside our own. Xander is a mage from a powerful family and Jack’s ex-best friend.

There was a lot going on in this storyline. The mystery of who is causing the fever and killing people, the relationship development between Xander and Jack, and the world building, all added up to a lot of information. But was definitely a good set up for future stories in this world.

I loved the small part Zephyr the gryphon played, he was an awesome addition to the story.

The action and adventure in conjunction with the mystery was well done. The magical world Noor built was original and held my interest well. The mystery aspect was well-crafted and mostly unpredictable. I had a few guesses how everything would work out but the way it was woven together in the end was well executed.

Overall I would say A Touch of Fever was a good start to a new series, and another author added to my list for PNR books.

Character development: 8/10 (both characters had their own voices)

Mystery: 9/10 (all of the pieces of the puzzle fit together well in the end but are still unpredictable)

Heat: 4/10 (only two sex scenes, but I expect more in the next book since this was the first in a series)

Writing: 9/10 (well balanced and description and dialogue, made the story easy to picture)