I am pretty picky about the ABO books I read. Usually the Omega is written like a helpless housewife from 1920, but Kai was definitely not helpless, and I loved that Julien and Scott were open to being with each other as well. There wasn’t any “Alphas can’t be together” prejudice. 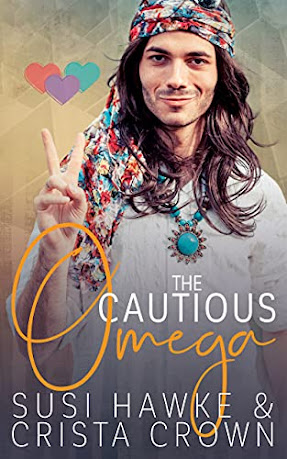 Can two alphas get one cautious omega to trust their love?

Kai, an omega doula, lives his life on his own terms. He’s free with his body, his mind, and his spirit. The only thing he keeps in tight lock-down is his heart, everything else is open game. The world is a beautiful place and he has so much love to share, the last thing he wants are labels and commitments. Those are messy, and Kai’s too cautious for that nonsense.

Scott is an alpha who’s freshly out of the military and wants nothing more than to get to know his ten-year-old son, Matty. Something he’s never really had a chance to do. But to do that, he needs a job, a house—a life. He absolutely does not need another fling that lands him in more trouble. And yet… he’s undeniably drawn toward not one, but two men.

Scott can’t deny that his British landlord, Julian, is the kind of alpha he’d love to dominate in bed. And Julian’s strange hippy friend Kai, with his uninhibited invitations and kisses makes everything seem so… easy. Though Scott does occasionally wonder if that’s because Kai might be sneaking something extra into his “special” brownies.

A no-strings attached agreement between the three seems ideal since none of them have any interest in settling down into a traditional alpha/omega relationship. But… what if the answer to all their desires isn’t one man… but two? What if their union is exactly what they need to heal their souls and build a family together… not just for them, but Matty, too?

This is the third book in the Three Hearts trilogy. Get ready for an 80k mmm romance featuring a quirky British mum, sweet, fluffy love between three guys who don’t know what they’re doing, and enough naughty, knotty heat to steam your kindle.

I absolutely adored Kai and his open approach to life. He struck me as a hippie from the 1960s in the best possible way. His long monologues about random life events and whatever happen to be on his mind were hysterical. He was definitely a strong and well developed character.

Scott was a great balance for Julien and Kai, but I felt like he was a little bit under developed. He was a retired soldier but there wasn’t much mention of anything that may have happened during his time in the military. I’m not saying every soldier comes back with PTSD but it just seemed like his history was glossed over a little bit. I liked seeing him reconnect with his son and the way that that was written added just enough conflict to move the story along but wasn’t over the top.

Julien was a proper Brit, although he disliked tea which was a funny little piece of information. It was great to see his relationship with his mother and the expectation she had for him. I’m not sure the reasons why Kai and Scott weren’t a couple already were completely flushed out, but Kai being A free spirit and Julien not wanting to be tied down were true to their character arc. Seemed like they needed Scott to complete them.

Overall The Cautious Omgea was a great book and I would recommend it for sure.

Heat: 7/10 (just right, well balanced to add to the story and relationship without being smut)

Humor: 6/10 (I was definitely chuckling at Kai’s monologues and Julian and Scott’s reaction to them)

Standalone: 8/10 (I think the story would be “more” enjoyable if you had read the first two books. But I have not read them and the story made sense and I didn’t feel like I was missing too much)

Meet cute: 9/10 (Scott’s meeting Kai and Julien the night he returns from deployment and is looking for a house is great)