on August 26, 2021
Who knew that getting left at the alter would be the meet-cute Aaron would need!  Jess Bryant did when she wrote Imposing Saint! 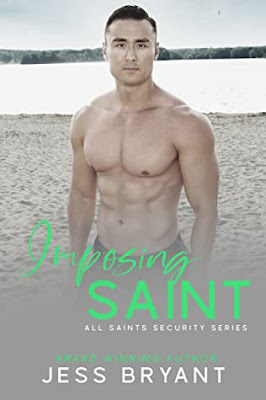 Aaron Laughlin is young, rich, and a star among the Nashville political elite. That’s why nobody is more surprised than him when he ends up abandoned at the altar. But here he is, dumped on the most important day of his life, embarrassed in front of his entire city, and left with a bruised ego in place of a broken heart.

Needing time away to regroup after the fiasco that could very well derail his career, he decides to head to the mountains and enjoy his honeymoon on his own. Only, he isn’t alone. His imposing new bodyguard refuses to let Aaron out of his sight, or his reach, and the way his dark eyes follow Aaron’s every move gets under his skin in a way he can’t shake, and isn’t sure he wants to.

Isaac Chinn is practical, professional and takes pride in being good at his job. He’s never even considered breaching the client/bodyguard boundary, which is why being stuck on the side of a mountain with the gorgeous jilted groom that isn’t quite as straight as he’d like people to think, is such an imposition. The mayor might annoy and intrigue him in equal measure but Isaac knows better than to cross the line.

Only, the heat that flares between them refuses to be ignored. They’re like gasoline and a match, destined to consume each other if they get too close. But when faced with the cold of loneliness, is it worth the risk to feel the heat of passion, even if it might destroy them both?

*Please note this is a full length M/M romance novel. While it is the third installment of the All Saints Security Series it can be read as a standalone and you do not need to have read the previous books in the series to enjoy Aaron and Isaac's story. However, Aaron does play an important role in book two so if you'd like to know more of his backstory before jumping into this one you can read Impulsive Saint which is a MF romance featuring Tyler St. James and Ashtyn Echols, the bride who leaves Aaron at the altar and sets this book in motion.*
My Review:
As an M/M reviewer I didn't read books one or two in this series and I don't feel like there are any major plot gaps that left me wondering, so it definitely can be read standalone!  That being said, I absolutely love Isaac as a character!  He's strong, intelligent and incredibly observant - and those are definite hot buttons for me!
Aaron, who has always known he was bi-sexual, is in the closet to protect his burgeoning political career and sees no reason to change that... especially when Isaac has the perfect cover as his bodyguard.  We who read M/M can already see the problem with a relationship where one partner can only be in the background though...
Imposing Saint is a well written and very sweet with heat romance with a HEA and just enough angst to carry the story.  If you like stories with a hot, smart bodyguard and his gorgeous, politician client getting together for their HEA then add Imposing Saint to your TBR!
5 Stars ARC Romance Series steamy