I had to stop and reflect for a while about my review of this book, which is why it's posting the day after release day... there were things I loved about this book and things that frustrated me to the nth degree and I had to reconcile that in my mind before I shared my review of Denver's Calling with you. 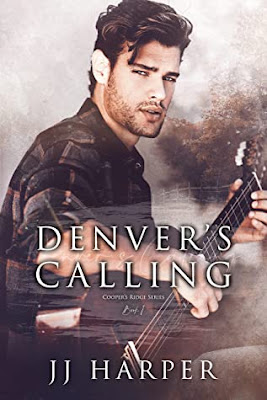 Denver's Calling was previously released in 2017. It has been re-edited and extended, but the story hasn't changed.

When Denver’s long-term partner breaks up with him, he flees his life, his career, and his bright future as one of the country’s leading trauma surgeons. Ditching everything but his dog, Denver returns to the quiet town of Cooper’s Ridge and his parents’ ranch.

Leaving twelve years earlier, Denver knew he would never be accepted as a gay man in an unaccepting town. So, when he meets Kes—an old school friend—in the bar he owns, he is shocked to find him in an openly gay relationship. Something he never thought would happen here.

What surprises him even more is the instant, mutual attraction the three men have. Accepting a job in Kes’ bar, they dance around each other, wanting them but not believing he would ever fit in with a couple so obviously in love. But, they want him. And they are not prepared to let him go.

Denver takes a risk and accepts their offer of a night out, finding a side of himself he never knew existed. Not trusting himself to be enough for the two men, the desire blooming in him is unprecedented and he can’t deny it: he wants them as much.

He finds his life falling into place, all because of two men. Is it possible he found his forever in a place he never expected it?

Denver's Calling truly an epic romance and while the timeline that the book covers is relatively short, it features a number of roller coaster moments featuring some emotional crashes.  Epic can be seen in multiple ways and I guess that's where I had the most difficulty in writing this review and rating this book, because several times in the book I thought ok, they're settled and the book is done - they're all on the same page and I can imagine their HEA, then I turn the page and we're back to zero, with huge character angst and different people running away from or into the relationship.  That made it a frustrating and sometimes exhausting read to get through, but with every challenge comes victory and I did like the wrap up plot twist at the end...

If you understand going in that this won't be your typical one or two crisis romance, you may be better prepared than I was for Denver's Calling.  If you love delving into a book deeper than typical romances than this is probably the book for you.

I gave this book 4 stars because I really did enjoy parts of it and while my expectations weren't exactly met, it did offer a strong HEA, some sexy triad action and lots to think about.