I have one word for Bully Rescue: intense! 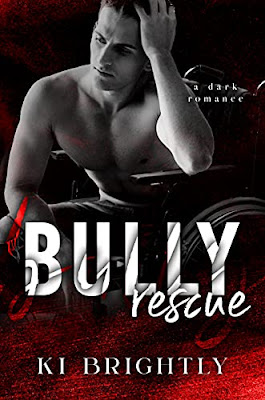 This is not a light or fluffy read by any stretch of the imagination. I had not previously read any of the stories in the series. I was glad to discover that Peter’s son Angel has his own book already.

The Washed-Up Fighter Who Can’t Play NicePeter Gaffin can be downright vicious, even while using a wheelchair. For years the former back-alley boxer has not only been terrified men from his past would exact their vengeance, but also of his sexuality. After an incident with the cops, Peter is on his way to prison. Behind bars, he won’t be able to repress his fears by being a reclusive alcoholic—or hide himself from the men who once preyed on him.The Protective Prison GuardDrew Greene has been working at Trident Falls Correctional for one reason: to keep track of the facility’s most dangerous inmate. The day Peter arrives at the prison, Drew’s solitary mission becomes something more. Peter gradually charms him and he wants to keep Peter safe. When he learns they share a dark secret, one that has ruled and ruined both their lives, Drew’s horror makes him even more determined to protect Peter. Targeted by Their PastThings look up when Peter is released from prison. Drew takes Peter home and helps him finish his long physical recovery that alcoholism derailed. Stronger and happier, Peter is ready to move on with Drew and try to repair the damage he caused. There is only one problem—Peter and Drew aren’t able to outrun their past for long. Can they come together to withstand the fallout from the truths they reveal, or will they both end up in prison… or worse, dead?

Bully Rescue portrays a hate group that has been invented. The people in the hate group are not good and are not presented as such; however, Bully Rescue does explore some of the ways individuals might enter and leave those types of harmful associations. As the author, I do not condone or support the ideologies or activities of any hate-based organizations, and this book is in no way meant to romanticize them. Please do not read Bully Rescue if you’re sensitive to this type of material.

Peter was so damaged from his time in the Arian Supremacy it was a steep uphill battle for him to find some small modicum of normalcy.

The love and dedication that Drew shows him even as his guard while he’s in prison is beautifully written. I am somewhat familiar with the struggles of the US prison system from the news stories and the way this book is written really highlights so many of the shortfalls.

If you’re in the mood for a light and fluffy read this one definitely is not for you. It is definitely worth reading though. I had to take a few reading breaks from it when the storyline got intense in places, but overall it was quite the story.

Heat: 7/10 (it’s slow burn in the beginning when Peter Andrew meet each other in the prison, Peter as a prisoner and drew as a guard. But once they get out all bets are off)

Length: 10/10 (it’s a pretty long story but I’m not sure what could have been cut to make it any shorter and still cover all of the necessary points)

Editing: 10/10 (I didn’t notice any mistakes or typos, which is unusual)

Meet cute: 9/10 (I’d call this a meet sad, not meet cute. When you meet as an inmate, it definitely makes things complicated)

Tissues needed: 7/10 (I didn’t actually cry while reading, but this one is definitely a painful, hit you in the feels kind of story)