You know a book called Forbidden Grief is going to be angsty... but in this case it was also sweet and steamy 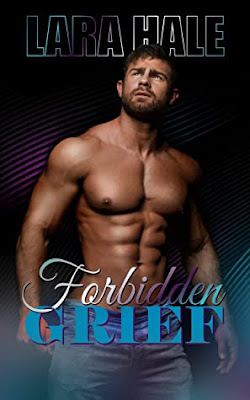 Beckham is in search of a nanny after losing the last one. He doesn’t trust just anybody with his precious daughter. The daughter he’s been raising on his own since the mother died three years ago. In an effort to help, his best friend suggests his younger brother, Carter, who got back from Europe and is still unemployed. If only Beckham had known that by accepting, his life would be changed forever.

Carter Wallace. Cheeky, charismatic, direct and honest, and overall a perfect guy. So why is it that everyone can find a relationship except him? He asked himself the question repeatedly not knowing that faith had not one, but two men that would steal his heart in a matter of days. What’s even more surprising—one of these men is his long-time crush. Beckham Karson.

Jason is a hopeless romantic, has the soul of an angel, and loves so deeply that it is impossible not to love him back. This is proven once again by the two men who fell at his feet. Jason loves his family just as fiercely, which is why he decided it was time to move to be near his niece—the only link of his sister that he had left. He knew what he was getting himself into. Jason knew this meant spending more time with the man he’s wanted since the first time his sister introduced him when they were kids. He knew he would have to somehow hide his feelings for his brother-in-law because it was his sister’s fiancé and yes.. because the man was totally straight.

This book combined the feels with steam.  Most of the angst comes from outside the relationship - jobs, homophobic family and co-workers etc, but that rubs off on the relationship between the characters and creates angst within the relationship.  What made this a 4, rather than a 5 star read is that it was filled with the classic anti-gay stereotype storylines - unaccepting parents, a guy at work who beats up the gay guy, the job that makes the guy in the poly relationship take paid leave to avoid scandal and it goes on... and if it were just one of these storylines, I wouldn't have been so critical, it's that it was all of them and more.  I do genuinely like the characters in the book and overall the story was well written has a sweet HEA and good steam.   If you are looking for an angsty triad for your TBR, this is a good one to add.

I did not read the first two books in the series and, while I think I might have known the side characters a little better, I did not feel like I was missing anything by starting at book 3.