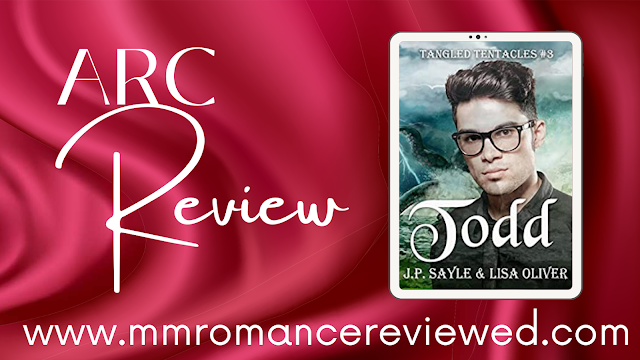 Well well well. The youngest Kraken brother, Todd, the only omega of the group, sure has some surprises up his sleeve... or um tentacles?
From the blurb: 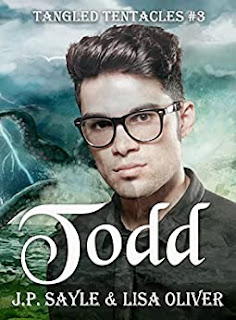 Were the Fates wrong giving Todd two mates, or will the two dragons be able to redeem themselves and win his heart?
Todd Thalassa is the youngest of five krakens and the only omega. When he discovers he has not one, but two fated mates, it sends him and his overprotective brothers into a tentacle spin. Todd has to navigate being part of a triad and stopping his brothers from interfering while working against the clock to find stolen dragon eggs ─ simple.
Lucas Benenati and Kijina Damaris have always known they were meant to be together, along with a third. A mission to find missing dragon eggs leads them to their fated mate. Unfortunately, they don’t make the best first impression on Todd or his brothers.
While searching for the missing eggs, the mates discover a despicable pattern that puts others at risk. Can they navigate a new relationship that’s full of revelations and surprizes while keeping everyone safe?
Todd #3 is a paranormal gay romance, with two dragons who find out that their kraken omega is one badass. This is the third book in the Tangled Tentacles Series. Each book in this series will deal with a new couple, therefore while the HEA is guaranteed. The Epilogue for each book will lead into the next title and the series should be read in order.
Jacqueleen the Reading Queen's Review:
Though he's been babied by his brothers for 500 years, Todd makes it clear in his book that he doesn't need to be coddled. His kraken is strong and has no qualms protecting those he loves or himself from danger. Just like his mates I'm a bit in awe of him.
Lucas and Ki didn't make the best first impression with Todd. It takes some time to straighten it all out, but thankfully not too much. Ki was absolutely the sweetest thing ever. If anyone was "traditionally" omega like in their throuple it would be him. He longs for a family full of babies and when he finds out Todd is the one who can make that dream come true he is over the moon. Lucas is the warrior. He's the protector of the trio. And now there was Todd, the glue that held them together. Their mating was so sweet and hot. I mean these authors don't hold back when it comes to the heat in this book going right in for the DP. 🔥🔥
There is a case of missing dragon eggs to solve, but the romance takes place front and center. I also think I've discovered who Kelvins mate is and no he isn't the next book. That would be Markov and if you've read book 2 I'm pretty sure you know who is mate is as well. I'm looking forward to seeing how Sayle and Oliver are going to pull off this redemption when the book comes out this August.
Rating: 4 Stars
Jacquie's Review:
Todd starts immediately where Victor left off, where Todd met his mates and they made a very poor first impression.
I loved Ki and Todd, Lucas less so, I felt he was pretty ignorant of how well he had it compared to the others and never really got that.
The steam was there, it was a pretty fast burn, including a super hot DP scene, and the mpreg features heavily this time. I really loved that Ki got his dream.
The plot is certainly building to something, with the investigation of the missing dragon eggs taking focus this time. With 2 brothers to go, I think it will be pretty explosive.
I'm excited for the next book.
Rating: 4 Stars
Heather's Review:
I've been waiting for Todd's story - I knew that as an omega in the Kraken family that his story would be special and in many ways it was.  This story was the first time Todd really emerged as an individual and got out from under his brothers and that was great to see.  He also ended up fated mates with two dragons.... but I found that the book was lacking in relationship building between the three men and focused on the dragon lore, dragon eggs and on the MPreg storyline.  I didn't connect to Ki or Lucas as much as I would have liked because of this, Lucas especially was hard to get a read on.
I think I have a strong idea of what this book is building towards with the next book's focus and some strong foreshadowing and I do look forward to that... but I hope we get to revisit Todd, Ki and Lucas some more to get to know them outside of the dragon egg storyline.
Rating: 4 Stars
Todd is currently available in e-book and paperback and can be read as part of your Kindle Unlimited Subscription
4 Stars ARC Dragons Fated Mates Jacqueleen Jacquie Kraken KU MMM MPreg Paranormal poly Series shapeshifter shifter Shifters suspense