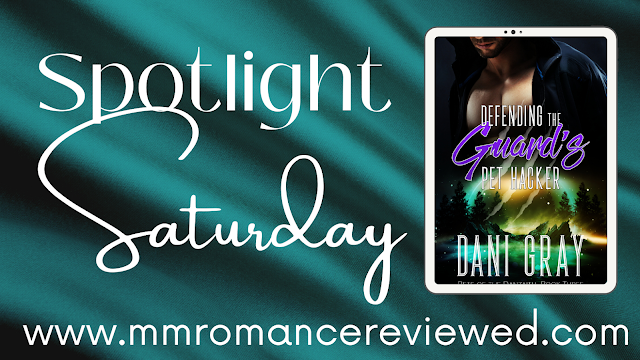 I love to support truly indie authors and today's Spotlight author is self-publishing her e-books to combat the complete overrun of fully read books being returned to Amazon... so please support author Dani Grey and purchase Defending the Guard’s Pet Hacker at http://www.authordanigray.com/store/p17/Defending_the_Guard%27s_Pet_Hacker.html#/ 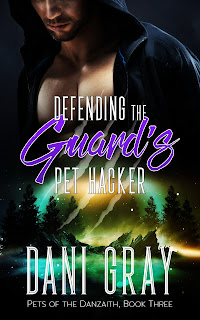 Xed Nesles didn’t expect to have been kidnapped for his hacking abilities, but when one of his parents is murdered in front of him and his family is taken hostage, he knew that he needed to play along until they could be rescued. When freedom finally came, one of his rescuers turned out to be his mate. Now, what was he supposed to do? His life was in shambles and his family needed him. He didn’t have time for a mate.
Stonal Taccin didn’t expect to find his mate when he was sent to rescue a hacker that kept getting into the Danzaith comms systems, no matter what protocols were put in his way to stop him. When they found out that he was doing this in order to keep his family safe from the people holding them hostage, Stonal and his team had to go in to do their jobs and free them. Life wasn’t always that easy.
Finding out who was behind the kidnapping, and the others who wanted to remove the King from power, Xed and Stonal had to work fast. They had to do this while trying to help Xed overcome his fear of mating after being forced to watch his family being brutalized to keep him under control. Time is running out for them as they attempt to keep the Royal Family safe. Will they be able to stop the coup and mate?
** Please note: there is a trigger warning in the book, so if that can be an issue for anyone, please check before you purchase. There is a reference to an event, but it’s never written on paper. **
~~~
Word count: 42,600
Warning: Gay erotic romance. The material in this book contains explicit sexual content that is intended for mature audiences only. All characters involved are adults capable of consent, are over the age of eighteen, and are willing participants.
﻿NOTE: when you purchase from the website, please wait for an auto email to be sent to you. It will send you all 3 formats of the book automatically. You will get pdf, ePub & mobi.
Excerpt from the Prologue:

Xed Nesles had been sleeping soundly when the front door of the home he shared with his family was blown open. His Seron had run over to his youngest brother’s room, while he ran to his middle brother. His Takar ran downstairs. He could hear shouting, and then a scream of pain. He knew it was his Takar who made that scream as he recognized his voice.

He heard the stomping boots of men running up the stairs, Xed tried to protect his brother as best he could, but Yasids was scared. He may have been thirteen and thought he was tough, but this was beyond anything they had ever dealt with. Even he was scared, and he was twenty-two.

“Get your hands up,” the men dressed in black yelled at them. They ran into all the rooms, screaming at everyone.

“Please, he’s just a kid,” Xed said. “We don’t have any weapons.” He stood there with his arms around his brother, who was shaking and trying hard not to show his fear.

He was small by Danzaith standards, standing at only six feet, with black hair and green eyes. Yasids was as tall as he was, and he was only thirteen, so he’d taken a lot of teasing and abuse growing up for his size.

This was why he preferred to stick with comms instead of people.

They weren’t assholes like these guys who were hurting his family.

Everyone was roughly pushed down the stairs, including his Seron and his eight-year-old brother, Roddir. There they found their Takar on his knees with another man standing behind him. He was holding his Takar by his hair and had put some type of collar on him. Xed had heard about them, so he knew it was stopping his Takar from shifting to his drosk. What scared him the most was the gun in the man’s hand.

“It’s so nice to finally meet you, Xed Nesles,” the man said.

“Who are you?” Xed shakily asked. “Why are you doing this?”

“I’m doing this because you are about to come work for me. We’ll be taking your family with us, in order to ensure your co-operation.” He waved his gun around at his brothers, causing them to cry out. “As for who I am, that isn’t important. All that you need to concern yourself with is doing as you’re told. We know just how smart you are, and what you can do with a comms, so you will now be working for us, getting the information we tell you to get.”

He stopped moving around and looked right at Xed, the look in his eyes chilling him.

“In order to gain your co-operation, here is a demonstration of what happens if you don’t do as you’re told.”

He lifted the gun and shot his Takar in the head, killing him.