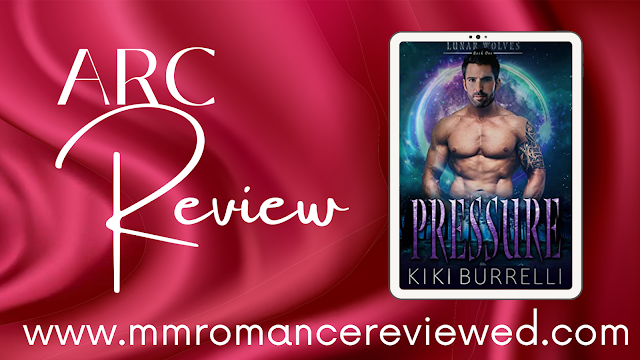 New paranormal world created by Kiki Burrelli? Sign me up! Jacqueleen the Reading Queen read Pressure and gave us her thoughts.
From the blurb:
Axe Landry needs a fake mate—fast. 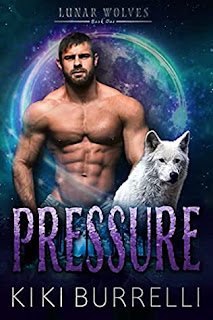 Axe Landry is the disgraced heir of a defeated Alpha. He craves law, order, and stability, but he's clinging to his position of Chief of the Lunar Council Enforcement Agency, the protectors of Crescent City, by a thread. If he doesn't find a mate—a witch mate, at that—by the next full moon, he's bound for a life of ridicule and isolation. And to Axe, that kind of humiliation is a fate worse than death.
Enter Caden Borealis—wild, reckless...and irresistible.
Caden hasn't made much of his twenty-three years on earth. His dysfunctional family and traumatic past sent him on a five year bender, but when his grandpa gets sick, Caden knows he needs to take care of the only person who ever cared about him. Caden's life is a mess, though, and he desperately needs money if he wants to save his grandpa's life.
A deliciously indecent proposal.
When Caden first hears Axe's proposal, he can't believe Axe is serious. All he has to do is pretend to be Axe's husband and Axe will give him half a million dollars? There has to be a catch. Sure, Axe is a little strict. And yeah, there's a list of rules Caden has to follow. But he can play the obedient pretend husband for as long as it takes for his grandpa to get better.
Unless it's all real...
When werewolves start to go missing in Crescent City, Caden realizes he might be in over his head. He's never let himself rely on anyone before, but Axe—older, gorgeous, steady Axe—becomes his rock as he learns to navigate this newfound world of witches and werewolves. But as the lines between real and pretend blur, Caden can't always remember that he's only acting like he's in love. He needs to keep his head in the game, but it might just be his heart that's calling the shots now.
Pressure is the first book in the Lunar Wolves series. It is a paranormal gay romance with mystery, suspense, a stern and sexy wolf, and an impulsive twink who maybe should’ve actually read that contract—like Axe had instructed—before he signed it.
Jacqueleen the Reading Queen's Review:
Great start to a new series by Kiki Burrelli. Then again I'm not surprised, I always love this authors wolves. The world-building is pretty cool. These wolves are in SPACE, well another planet that is. There's also mages and magic which always brings the fun.
Caden is sassy, while Axe is the rock. They shouldn't work on paper and have quite the unconventional start, but their relationship works. It was actually pretty sweet interspersed with some hot AF steamy, knotty moments. On top of that there's also some politics to navigate.
I liked the side characters and am hoping for some of their books in the future. The next book is Huxley and I have some ideas sparking in my head about who his mate may be, but I also may be wrong based on the little we are given as a hint at the end of Pressure. Enemies to lovers is totally my jam so wishful thinking on my part may also be the culprit. Time will tell!
Rating: 4 Stars
Pressure is currently available as an e-book and can be read as part of your Kindle Unlimited Subscription
4 Stars ARC fake dating Jacqueleen knotting KU mystery Paranormal Series steamy werewolf witch