Obstacles We Overcame (Season of Shifters #2) by Alexandra Christine 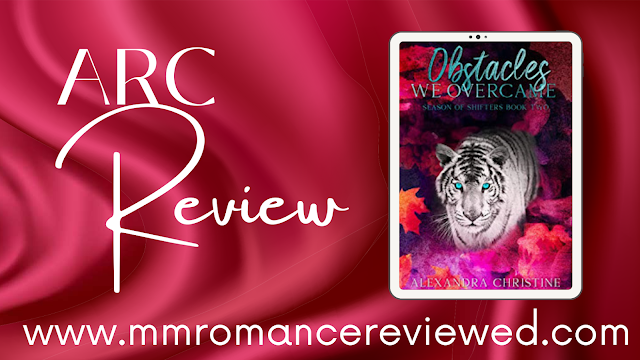 "What a steamy fun little novella!!" Nicole says that Obstacles We Overcame is "the second story in the Season of Shifters series, but I read as a standalone with no issues."
From the blurb: 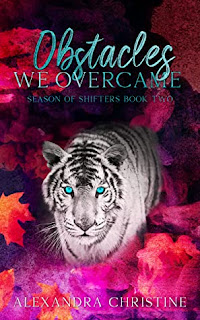 Dex comes across a cute bookstore, but it’s not the books he’s interested in, it’s the sexy owner, Killian. He’s hit with an instant attraction, but things get complicated when he feels the same for the silver fox across the way.
Silver Fox Hunter wants to settle down and Killian has bigger problems to deal with than the gorgeous teal eyed boy. They both want him, but they also want each other.
Will Dex be able to overcome his fear and insecurities with the help of Hunter and Killian, or will the first great thing that’s happened to him blow up in his face?
TW & Tropes: Emotional trauma, death, bullying, name calling, daddy kink, mmm, cock cages, play spanking, monster sized dick, graphic/group sex, graphic language
Obstacles We Overcame is a stand-alone in the Season of Shifters series, but they are interconnected with characters making an appearance from Scars We Shared.
Nicole's Review:
Dex is a stunning white tiger shifter with some serious confidence issues.  Old insecurities due to a terrible previous relationship make him feel undeserving of love.
Killian is a black panther shifter who owns his own bookstore.  He is kind and cares deeply for his customers, which catches Dex's attention and fascination.
Hunter is a sexy silver fox looking to settle down after too many years of one night stands.  After witnessing the disastrous first few interactions between Dex and Killian, he has to step in.
From there, the intense heat begins.  These three have a beautiful relationship, and so much steam I couldn't put Obstacles We Overcame down until I finished!
Rating: 5 Stars
Obstacles We Overcame is currently available in e-book and paperback and can be read as part of your Kindle Unlimited Subscription
5 Stars ARC KU MMM Nicole novella Paranormal Series shifter Shifters Standalone steamy