Nikolai's Beloved (Vampires of the Beloved Gem #5) by Taylor Rylan 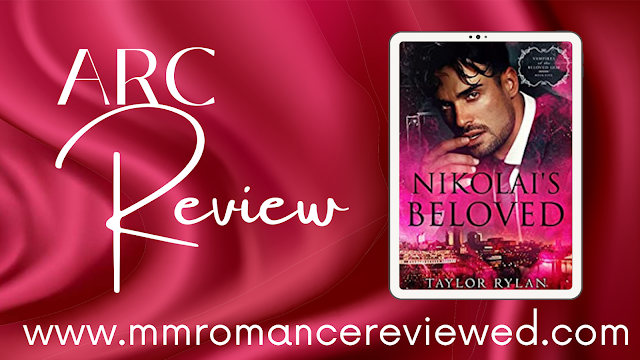 Nikolai's Beloved features a coven master that finally gets his beloved. A beloved with a mysterious past. And a laugh out loud meddling family.
From the blurb:
When fate doesn’t get it right the first time, second chances at love are a true blessing you didn’t know you needed. 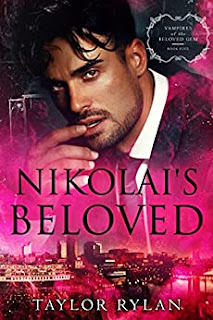 As the master of his coven, Nikolai Cardello was happy to watch his vampires finally be blessed with their fated mates. Despite having had a chance at a love that wasn’t meant to be, he had a fulfilling life, and his adopted son had given him the family he’d always dreamed about.
Julian Williams didn’t want join his brother for dinner, but something was telling him he really needed to go. When a strange interaction with an intimidating vampire turns to Julian scenting his mate when they leave, the last thing he expects is to be thrust into a world of created ones and an intriguing and powerful warlock. But Julian would do anything for Nikolai, even dropping everything about his former life to become the mate that Nikolai deserves.
New friendships are formed aboard the Beloved Gem, and a chance trip to Montana to join Nikolai’s family for the winter holidays solves a century-old mystery surrounding Julian. But what does that mean for the newly mated couple? What is going to happen to the Beloved Gem, the unconventional coven house that Nikolai and his vampires have called home for the past fifty years?
Nikolai's Beloved is the fifth book in the Vampires of the Beloved Gem series. Each book in the series focuses on a different couple, but these books should be read in order as there is an ongoing backstory, and previous couples will make appearances in future books. This is a fated mate MPREG story with plenty of sexy times. You should expect all the normal vampire shenanigans and sometimes love bites in unexpected places.
Janet's Review:
Nikolai's Beloved is the fifth book in the Vampires of the Beloved Gem series. It doesn’t have to be read first but should as there is an interweaving storyline, and you’ll get the most enjoyable reading experience having read the series in order.
I honestly believe that each of these stories in this series just keep getting better and better with each new story. I have been anxiously waiting for Nikolai’s story and the author knocked it out of the ballpark.
Nikolai always made me feel he was somewhat aloof but deep down he was inherently kind and wanted the best for his found family. Nikolai returns to Italy to put an end to a chapter from his past. When he comes back, he has dinner with Gio and Lucius, there he meets his beloved Julian.
I freaking loved and laughed several times at the meddling of Gio and Lucius. Julian’s back story and history broke my heart a little.
I love that we get a glimpse into a lot of previous characters from different story lines.
Overall, a truly phenomenal read! It was well written with fantastic pacing! I stayed up all night reading it as soon as I got the book!
Rating: 5 Stars
Nikolai's Beloved is currently available in e-book and paperback and can be read as part of your Kindle Unlimited Subscription
5 Stars ARC Fated Mates Janet KU MPreg Paranormal Series steamy vampire