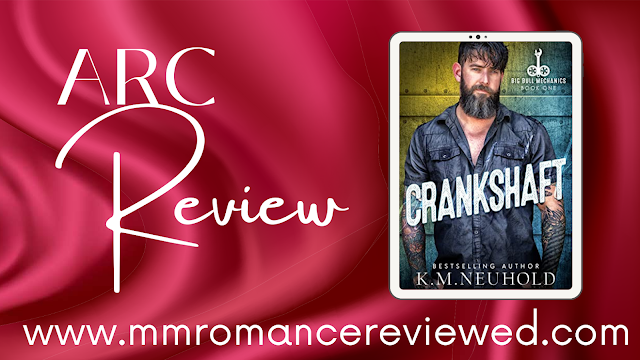 Crankshaft features a quirky veterinarian and big hairy bear mechanic. Adorable pets including bunnies!
From the blurb:
I don’t have time for a relationship, not even with the adorably dorky vet I can’t seem to stop bumping into… *sigh * pass the oil and lube 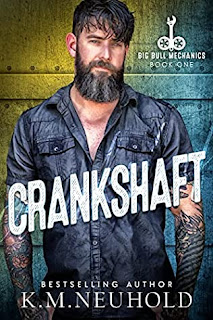 Between running a garage full of beefed up, gear head mechanics and bailing my idiot brother out of trouble every other week, the last thing I have time for is a relationship.
I’ve tried it too many times, and the ridiculous reasons I always find to end it have become a running joke around the garage. But I’ve learned my lesson. No. More. Boyfriends.
I don’t care how many times Porter falls asleep drunk in my bed or how cute he looks covered in oil smears while I teach him how to fix up the vintage car he has rusting away in his garage, I’m not going to fall for him.
Even if I did, what do a mechanic and a veterinarian have in common anyway?
It’s better if we’re only friends… friends who occasionally fiddle with each other’s crankshafts…
Janet's Review:
Crankshaft is the first story in the Bull Mechanics series which is a spin off of the Four Bears Construction.
It features Porter an adorable, quirky and somewhat dorky veterinarian and Steele the owner of Bull Mechanics.
Porter is busy trying to run his practice and doesn’t feel like he has time for a relationship. Steele wants a boyfriend but he’s too picky and dumps them shortly after beginning a relationship them.
I adored Porter and Steele together, they were so fun to read. The chemistry between them is sizzling hot and steamy.
I loved how they were in a relationship and neither of them really realized it.
Crankshaft made me smile the whole time I was reading it! Overall, a fun read, fantastic! It was well written with that perfect pacing that hooked me.
Rating: 5 Stars
Jacqueleen the Reading Queen's Review:
Cute, quick read, with virtually no angst. Good amount of steam and holy hell the dirty talk 🙌🏻.

Porter is certainly one of those "lady in the streets, freak in the sheets types." The mouth on him! 🔥🔥 Steele wasn't complaining one bit. In fact it was actually cute when Steele would get all growly over Porter. A possessive Steele is a yummy Steele.

I was so happy that Porter finally found himself his forever guy. Instead of a Bear, he needed a Bull!

Can't wait for the rest of the Mechanics to find their HEA. Maybe one of them will end up with a certain new vet we meet in this one!

Rating: 4 Stars
Laora's Review:
I think K.M. Neuhold has another good series in hand, if this first book in the new Big Bull Mechanics series is the standard. The author had no problem to draw me in the storyline and root for, laugh with and cheer on everyone involved.
Porter and Steele are both busy business owners and the right combo for each other. Porter looks prim and proper, but holy dog biscuits. He is a whole different man in private with Steele. Steele is the caring bear he seems to be. They have serious chemistry and are steamy and cuddly and sweet together.
I liked  getting reacquainted side characters who have had their own books and known characters who might get their own.
Crankshaft was a fun, steamy good read with of course another great pet in the mic as well, que Denali the bouncy Husky.
Rating: 4.5 Stars
SNik's Review:
First in series (Big Bull Mechanics) a spinoff from the author’s Four Bears Construction series. Low angst. Found family. Dual POV.
Managing his own veterinarian business is running Porter ragged and he doesn’t have time for hookups let alone a relationship, but he can’t help his attraction to car mechanic Steele.
While Steele has his own business to run, as well as bailing his younger brother out of trouble every couple months, he feels like every time he interacts with Porter could lead to something more, if only they could find the time.
I appreciated the realism of two people trying to lead busy professional lives trying to create something together without any drama or high angst.
Porter and Steele are both sweethearts that easily slide into a relationship, becoming close and supportive of each other fitting together almost seamlessly.
Crankshaft makes falling in love look easy and really was such a joy to read, with of course some cute cameos and a large group of supportive and fun secondary characters.
Rating: 4.5 Stars
Sheena's Review:
This is the first of a new series, it's a spin off from the Four Bears series which I loved, but you don't have to read that first to enjoy this.  It is set in the same world as that series and contains some wonderful cameos from the Bears but this is almost totally new.
I say almost, because this is Porter's story.  We first meet Porter in the Four Bears series where he (hilariously) failed to snare more than one of the bears.  On the face of it, Porter is a mild mannered veterinarian who just wants to find his Happy Ever After.  Steele, the owner of Big Bull Mechanics is also introduced briefly but we get to know him so much better here, and I loved it.
I loved this book.  On the face of it, we have the little nerdy veterinarian and the big burly mechanic so you know how this goes, right?  Uh, nope.  This is not that story, this is totally turned on its' head and I am here for it.  I love when tropes get turned around this is done wonderfully.  First of all, Porter is not some shrinking violet, he knows what he wants and is incredibly determined in how he's going to get it.  He's toppy, dominant and has THE most utterly filthy mouth, and I adored it.  Steele is the big cuddly softie who needs all the reassurance and I adored their interactions.
It's hilarious, sweet, utterly filthy, full of heat yet at the same utterly sweet and you'll just be with these guys all the way.  I was, and now I can't wait for more.
This is all the tropes you've ever thought of all turned on their head and it's just brilliant.  I can't recommend this more.
Rating: 5 Stars
Heather's Review:
Kyleen Neuhold knows how to write sexy blue collar mechanics... and she also knows how to write cute nerdy veterinarians...  just what I was craving after the end of the Four Bears Construction series... a bear tamed by a vet!
I love how strong and vibrant Porter is and how sweet and cuddly Steele is... what more can I say - this is a deliciously steamy, low angst read with amazing characters, cameos from some old favourite friends and new Bull mechanics who will need their HEA's.
Rating: 5 Stars
Tatted_book_freak's Review:
I don’t have time for a relationship, not even with the adorably dorky vet I can’t seem to stop bumping into… *sigh * pass the oil and lube
What an awesome first read by an author that is constant on my timeline! Now I see why!! This book was filled with so much humor and passion, along with some serious issues that needed to be overcome, with snide remarks and playful, flirtatious banter mixed with a lot of steam!
“𝙄𝙛 𝙝𝙤𝙧𝙣𝙮 𝙢𝙚𝙘𝙝𝙖𝙣𝙞𝙘𝙨 𝙖𝙧𝙚 𝙤𝙛𝙛𝙚𝙧𝙞𝙣𝙜…”
Porter and Steele just fit, like two puzzle pieces meant to be together. Their busy schedules wasn’t even able to stop their undeniable connection, well, maybe bunnies had a little bit to do with that, but they made it work once giving in.
“𝐓𝐡𝐚𝐭 𝐢𝐬 𝐩𝐮𝐫𝐞 𝐮𝐧𝐫𝐞𝐬𝐨𝐥𝐯𝐞𝐝 𝐬𝐞𝐱𝐮𝐚𝐥 𝐭𝐞𝐧𝐬𝐢𝐨𝐧, 𝐟𝐨𝐥𝐤𝐬.”
Their chemistry was absolutely explosive! Never assume anything regarding quiet ones either, because Porters mouth was pure nastiness! Steele definitely had his moments, too! Cannot wait to dive into more by this author, hoping their intimacy is the same if not better 🤤
Rating: 5 Stars
Crankshaft is currently available in e-book and paperback and can be read as part of your Kindle Unlimited Subscription
4 Stars 4.5 stars 5 Stars ARC Contemporary Friends to Lovers Heather Jacqueleen KU Laora low angst Multiple Reviewers Series Sheena SNik spin off steamy tatted_book_freak