Blog Tour & Giveaway with Exclusive Excerpt: The Shackles that Hold Us by Michel Notaro 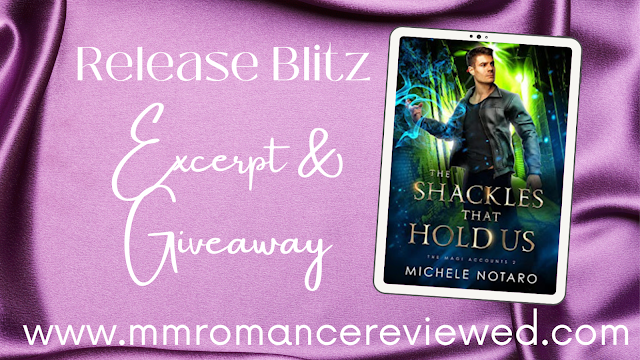 Michele Notaro has a new MM urban fantasy out, The Magi Accounts book 2: The Shackles That Hold Us. And there's a giveaway.

As if crushin’ on a shifter wasn’t bad enough, I had to go and date one.

A mage and a shifter walk into a bar… No, that’s the whole joke.

Magi and shifters don’t mix, and yet I find myself in a relationship with Cosmo, a lion shifter. And on top of that, Cosmo, and all his pride members, consider my brothers and me to be a part of their pride. Three magi in a shifter pride. Who would’ve ever thought?

Navigating our connection while trying to figure out what’s going on in the world isn’t easy. Trusting that Cosmo means forever when he says it? Even harder. But if there’s one thing I’ve learned since meeting the Ono-Nais, it’s that taking a risk with my heart will be worth it to be a part of their lives.

The Shackles That Hold Us is a 113K novel and the second book in the MM urban fantasy series, The Magi Accounts. It’s recommended to read the series in order because it has an ongoing storyline.

*Intended for adults only. Please read the trigger warnings at the beginning of this novel.

Michele is giving away a $20 Amazon Gift Card with this tour: Cos said, panting heavily, “Injured but nothing severe. He’s fine for right now. He’ll shift soon if he needs to. Don’t worry about it.”

I sagged in relief. “Thank the goddess.”

Zara’s voice came over the comms, saying, “Harriet and I are heading inside. There’s a few people trapped under a fallen beam. I’m going to get them out.”

“Wait!” Cosmo yelled, and even over the comms, I could hear his alpha power leaking through. “Don’t you dare go in there without backup.”

Oh shit. He just commanded a freaking human captain. I glanced over at Zara and Harriet, still at the front doors, and my brows lifted when Harriet said, “I’m her backup, Cosmo.”

“No offense, Harriet,” Cos said, “but you can’t protect either of you from a taragorian if one gets inside. Kulani’s on his way to you. Please wait.”

“Will do,” Harriet said, surprising me further.

I shook my head. “I don’t know. Harriet’s always been cool, but this is like next level.”

“Tell me about it.” He gestured to our team fighting a little red taragorian. “I can provide some interference from here. They’re two people down now.”

I nodded. “Good plan.” I tapped my ear and said to Cos, Charlie, and Dare, “Jude can shoot some energy balls your way to keep your target confused and distracted.”

Cos said, “Perfect. Thank you.”

Jude used his carved runes to create energy balls, then used more runes to fly them through the air—and over the top of people’s heads—to land true on his target. That was why he could shoot from here, even with all these people running around.

As he created his energy balls, I weaved a hole in our shield so he could pass the balls through it instead of having his magic bounce off the shield and right back at us.

The building made a groaning noise, and I gasped, checking for where it shifted.

“I need to add another beam over there.” I pointed to the side, maybe thirty feet from my current beams.

“You think you can handle another set?”

I quickly activated steel, beam, strength, and growth, then added an additional strength, just to be sure. After setting that beam up, I took a breath. Holy shit. I was up to forty-six runes now.

After Jude threw his fifth one, he asked, “How you holding up?”

“Uh, I’m okay.” I grimaced. I was okay, but I was also sweating to death from holding so many sigils for so long and was also getting a headache. People kept running into my beams and into the shield I had around the two of us, creating backlash in my head. Plus, the fucking tear wanted to grow, so I was fighting that as well. Not to mention the one taragorian I still had trapped under a different shield. It was fighting tooth and claw to get out and eat all the screaming people. With their yelling being so loud, I had half a mind to let him, if only to help my head.

Without taking his eyes off his target, he reached over and punched my arm.

“You’re not allowed to hurt yourself.”

“So you’re going to hurt me instead? Jerkhole.”

He glanced at me for a split-second. “That didn’t hurt. I barely touched you.”

He snorted, then sobered. “Do you need me to stop this?”

We spent the next five minutes assisting the shifters in their fight before the building made a very loud, very ominous groaning sound.

“Oh shit!” I yelled as a huge piece of the roof slid down, heading straight for a group of humans trying to carry someone out of the building on a stretcher. Screams lit the air, and without thinking, I grabbed Jude and activated two airs, strength, and gust, then weaved them together into the levitation spell, which basically wrapped air around an object to lift it. But this needed gust and strength to stop the debris’ velocity.

I let out a scream, falling to one knee as the backlash made my vision go black around the edges. It took all of my concentration not to drop any other runes while I focused on catching the debris. The chunk of concrete very quickly slowed down, then came to a sudden stop just shy of smashing the humans.

I rubbed my eyes with one hand, panting with effort. Jude’s hand grabbed my shoulder, and when he moved a little closer to me, I leaned into his leg, letting him hold me up for a moment.

My dyad’s voice said over our HIDs, “Harriet, you need to get those people out of here. The building’s going to collapse. The tear is growing.”

Harriet said, “We’re almost done. There was an entire section of the mall blocked off from the initial collapse. Zara and Kulani moved enough out of the way to allow passage. We’ll be bringing the last group out in just a minute.”

Cos said, “Mads, release the taragorian you captured. We’re ready to take him out.”

Without bothering to look because my head was pounding, I released that weave, then took a breath. That lessened the pain some, now that the beast wasn’t fighting against me.

Jude rubbed my shoulder. “Mads, I need you to open your eyes and lower the debris. Then you can release those runes, too.”

I nodded, then groaned in pain. Do not move your head, idiot.

With squinted eyes, I manipulated the levitation spell to lower the concrete to the ground, then released it and sighed in relief.

In Magi, Jude said, “Let’s not do fifty runes at once while holding up a fucking building again, yeah?” Michele is married to an awesome guy that puts up with her and all the burnt dinners she makes—hey, sometimes characters are a bit distracting, and who doesn’t plot when they’re supposed to be cooking? They live together in Baltimore, Maryland with two little monsters, three-legged and four-legged fiends, and a little old man (aka their two sons, their two cats, and their senior dog). She hopes to rescue another cat soon, and if her hubby wouldn’t kill her, she’d get more than one… and maybe a few more dogs as well.

She loves creating worlds filled with lots of love, chosen family, and of course, magic, but she also likes making the characters fight for that happy ending. She hopes to one day write all the stories in her head—even if there are too many to count!

Click on the graphic below to see our team's review of The Shackles that Hold Us: 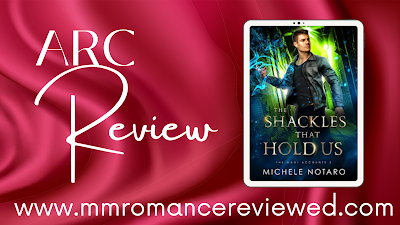