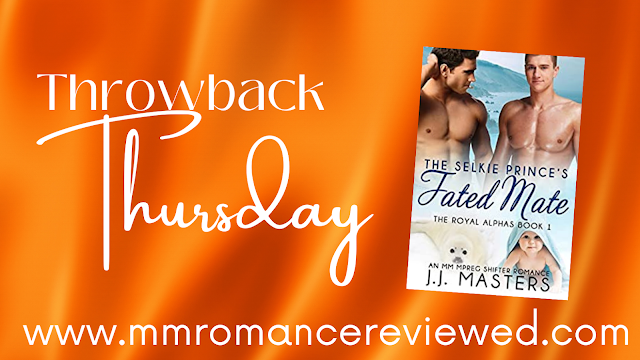 Today's Throwback Thursday features the first of five books in the Royal Alpha Series by J.J. Masters, which featured stories of five different Selkie Princes and their mates... The Selkie Prince's Fated Mate originally released in the summer of 2018!

Let us know in the comments if you've read the series or if you're planning to add it to your TBR! 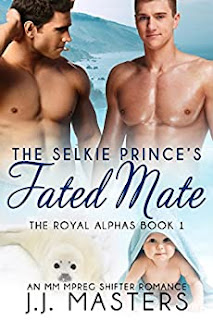 A Selkie prince forced to produce an heir. An omega destined to become a royal’s fated mate...
Prince Kai’s life as he knows it is now over. As the firstborn alpha to the Selkie King of the North, he’s required to produce an heir. Whether he wants to or not. When the Selkie Seekers finally present his fated mate, he dreads being tied to this stranger for the rest of his life. He can only hope his omega will be easy on the eyes and somewhat intelligent.
Raised in a family of good breeding, Luca always knew it was possible he’d end up the mate for an alpha of nobility. Only to whom, he never knew. Every time the Seekers summoned him for the humiliating presentation ceremony to royalty of all levels, he feared being stuck with some unbearable, abusive or very unattractive alpha. As an omega he doesn’t have the choice to say no. Not only is it his obligation, it’s the law. If he refuses, he and his family would become outcasts and banished from the Selkie community.
However, as soon as Kai enters the Great Hall of the North, it’s clear that the handsome prince is his alpha. Luca’s pleased with the choice the fates made until the king demands that not only he become pregnant within six months but produce an alpha pup with his son, otherwise he’ll be cast aside. And getting pregnant might be a problem...
Note: The Selkie Prince's Fated Mate is a 56k word m/m shifter mpreg story.  This is the first book in the Royal Alpha series. Due to the “knotty” times in this book, it is recommended for mature readers only. While it can be read as a standalone, it’s recommended to read the series in order. And, like all of my books, it has an HEA.
Excerpt:
The blood rushed to Kai’s cock as he took a long, deep inhale.

This Presentation Ceremony was unnecessary. As were all the last dozen or so. There was no reason to have six omegas from all over the country—and even some from Europe—presenting themselves to him each time.

All to find his fated mate.

No matter what, it was clear. The pater of his future pups was now present in the Great Hall. He was one of the six males naked on their hands and knees, their foreheads pressed to the cold stone floor, their asses high in the air.

The second Kai had entered the hall, his omega’s slick glands had started to express themselves. It was hard to deny the scent his future mate gave off.

His hatred for these presentation ceremonies burned within him like the heat of a thousand suns. How insulting to be an omega from a good family and be forced to be on display in front of many, many other males in the hall and postulating in front of the reigning King of the North.

The ruling Selkie male loved this pomp and circumstance. Kai despised it.

His father sat on his throne at the head of the hall, wearing not only his damn crown, but holding his scepter.

But like it’d been told to Kai countless times before, it was all for the good of the race.

Being the oldest son of five, he was next in line for the throne.

Not that he wanted it, because he didn’t.

Not that he had a choice. He certainly didn’t.

Just like he wouldn’t have a choice in choosing his future mate. That would be chosen for him due to the fates. An omega he’d have to spend the rest of his life with, who would sit by his side if and when Kai ever reigned the kingdom, and who would bear his pups.

No, Kai’s body would decide that.

So, he had no choice. None. And neither did his omega.

Kai hoped he at least found his bonded mate easy on the eyes, and somewhat intelligent. Otherwise, he wasn’t sure if he’d be able to tolerate being tied to a male Kai couldn’t bear to look at, breed with, or even have a decent conversation with.

Kai’s nostrils flared as the sweet, luring scent of his bonded mate became stronger. His cock was now more painful than ever.

He didn’t think he’d ever gotten this hard with any of his beta or human lovers.

Kai frowned at all the formality. The Royal Guards lined both sides of the hall, leaving him a clear path to the throne, the “presentation,” and his four brothers. Two stood on one side of their father, two on the other.

They looked as uncomfortable as Kai felt and Zale was giving him an intense stare that read, “Hurry up and choose, so we all can get the bloody hell out of here.”

With a sigh, Kai moved forward, his eyes traveling over the bare asses being presented for everyone to see.

Thanks be to Poseidon, he was grateful that he was not an omega.

His nose wrinkled and twitched as he strolled down the line behind them. But his attention kept being drawn to the omega on the end.

That was him. His mate. His future.

Kai’s life as he knew it was now over. The Seekers had finally found his mate. He purposely rounded the group and then, crossing his arms behind his back, he marched down the line in the front.

Because to do so was expected. And, of course, by doing what was expected would keep his father’s ire at him to a minimum. Staying off the king’s radar was something he and his brothers have worked hard at since they were young pups.

Kai took shallow breaths through his mouth, so his omega’s scent wouldn’t overwhelm him. He certainly never smelled anything like it.

Admittedly, it was heady. It made his heart race and his cock twitch. And the strong instinct to mount and rut his omega right then and there made his mind spin.

Kai was a bit worried that it might actually happen if they didn’t hurry up and get this “ceremony” over with.

No one had explained to him just how strong his instincts to rut would become once he found his fated mate. It was quite disturbing since it made his control teeter on a dangerous edge. He gritted his teeth and twisted his fingers together behind his back to make sure he remained upright on his two feet, as well as fully clothed."

The Selkie Prince's Fated Mate is is currently available in e-book, audiobook and paperback and can be read as part of your Kindle Unlimited Subscription