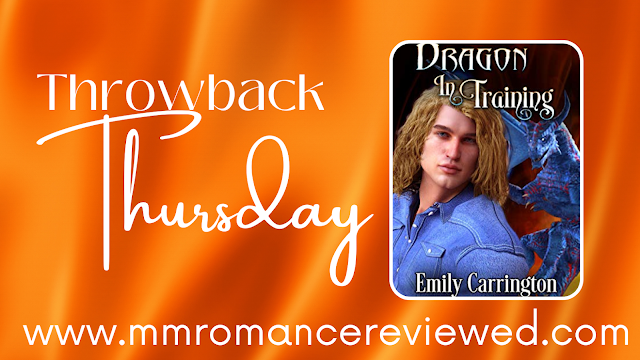 Today's Throwback Thursday, Dragon In Training, takes us back eleven years to when the stories were first published idividually!  The Dragon In Training anthology was published in spring of 2019, bringing back Emily Carrington's beloved characters... and today we're celebrating with a delicious excerpt from Dragon Food!
but first, the blurb: 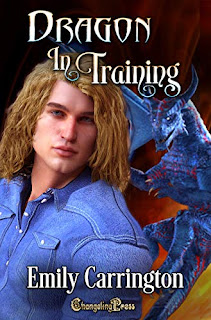 Dragon Food: Something is hunting along the Gulf coast of Florida, and Mark Tavery is tasked with finding it. His expertise in dragons is his pride, but he can’t say the same about his romantic relationships. When he picks up a lamp during his investigation, he’s shocked at his instant attraction to, and all-consuming need for, the genie inside. Mark’s greatest desire is to have Luke in his life and in his bed, but giving in to the promise in Luke’s touch means Mark runs the risk of killing the genie he loves.

Dragon Fire: Luke is a genie with almost limitless power, but it does him no good when his lover, Mark, won’t let him have the two things he really wants: for Mark to rely on him as an equal partner during magical conflicts, and to be dominated in bed. Will Luke ever get the chance to prove that he can be both strong in the field and the perfect submissive in the sack?

Dragon’s Bane: Atlas, a genie-god with nearly limitless power, has one task. He must find the modern equivalent of Cerberus and kill it. He discovers the three-headed dog’s incarnation are three figures that surround his current master -- Dan’s current lover, Reese, Mark, a water dragon and Reese’s obsession, and Luke, Mark’s genie. Mark and Luke find their memories are altered and untrustworthy. One thing is clear: Only their love for each other can save them -- and everyone at SearchLight -- from Atlas completing his terrible final task.

Excerpt from
Being trapped in a lamp for twenty years at a time wasn’t as unpleasant as it sounded. Damn lonely but not unpleasant. Luke, like all genies, was able to make his prison a palace, and as long as he kept busy, each time of confinement went swiftly. He’d been alive for over ten centuries; what was a score of years?
This stint was almost done. He went to the covered clock that hung on the other side of the room, walking easily with the almost imperceptible rocking of the lamp under his feet. His last mistress, after getting what she most wanted, had tossed his prison over the side of a boat, and he’d been forced to go with it.
He brushed the clock’s velvet curtain aside so he could study the face. The hands read April 2004, and he nodded. Almost twenty years had passed. His lamp would be picked up soon. Goddess, God, or fate always made it so.
Luke grabbed his wrists and stretched upward, wincing at the satisfying series of pops that walked up his back. “About time.” He shot a glance at his bookshelves. “This time, I’ll bring back more books.” He leaned backward and rolled into a handstand. Facing away from the clock now, he headed for his closet. Its doors slid back, disclosing outfits that reflected the many centuries of his existence. His first-meeting wear would never be current, but that didn’t matter; peacock behavior was for mortals.
He laughed. “Says the man who keeps almost everything he wears in any century.” He curled down into a crouch, then stood, shedding both boxers and T-shirt with two fluid movements. “Maybe a traditional genie turban…” Brushing clothes this way and that on the closet’s bar, he didn’t at first feel the summoning tingle that started at the roots of his hair. “Or a business suit?”
The tingling spread down to his neck and then out to both hands. Luke scrabbled for his boxers. “Wait! I’m not ready!”
“Use your magic, stupid,” spoke up Benji’s voice. His maker was long gone, but his voice seemed to always come at the best and worst times.
He laughed again and started to think himself into a pair of swimming trunks, but the summoning tingle encompassed his whole body. Naked, his own powers frozen for the moment of transport, he was sucked out of the lamp.
Well, he was definitely going to make an impression. He grinned inside himself like a fully risen sun. Best case scenario, his new master would be blind, and thus his nudity wouldn’t matter.
With over 600 pages of PNR goodness, grab your copy of Dragon In Training today!
Buylinks: